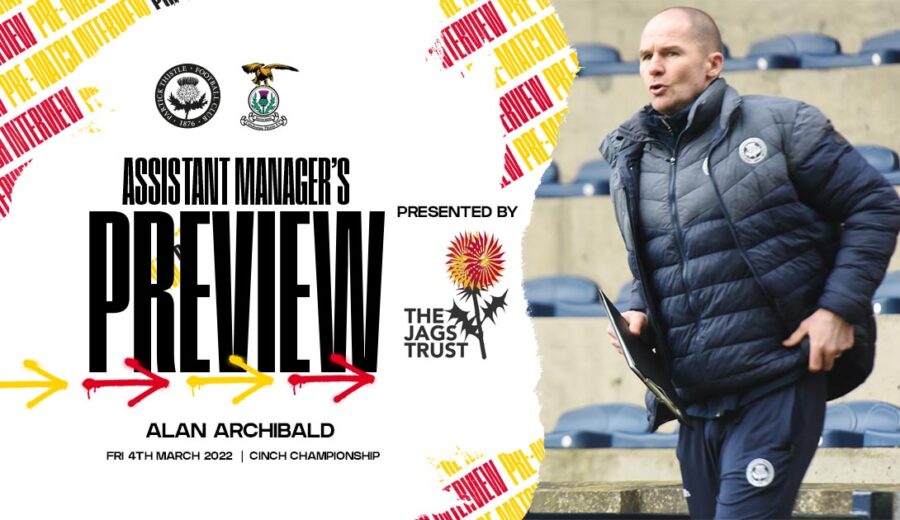 It’s Friday night football in Maryhill for Partick Thistle as Inverness Caledonian Thistle head to Glasgow in front of the BBC Scotland cameras looking for three cinch Championship points. Ian McCall’s side will be looking for their first victory of the season against Billy Dodds’ side having shared the spoils in agonising fashion a few weeks ago.

“It’s a game we’re all looking forward to. The players all love playing in front of the television cameras, it’s a chance to showcase themselves and the club to the watching public on Friday night.

“We’ve played Inverness three teams so far and haven’t beaten them yet. They battered us at Firhill earlier this season and we were lucky to get a draw in all honesty but I thought we were the better side against them in February and we both had a good 45 minutes when we faced off at the start of the season.”

It’s been a little under 48 hours since Thistle were in action at Gayfield against Arbroath taking a well merited point back to Glasgow.

“You’d obviously prefer to play Tuesday-Saturday but Friday-Tuesday is pretty much the same as Wednesday-Saturday so we’ve been emphasising recovery to all the players. We had a very light training session on Thursday and as a former player myself, I know how much I preferred playing games compared to training all week for a match.

“We just keep the boys ticking over and make sure they manage their loads right and we just get ready to go again. We finished the game on Tuesday really strongly, we were the best team in the second half so we’re looking to take that form into Friday night and use it as a chance to climb the table again.”

Having returned from Gayfield with a point earlier this week, Alan is looking to turn it into a good one by taking all three tomorrow night.

“We’re obviously disappointed to get a draw on Tuesday as we try to win every game but it is a tough place to go. We didn’t play anywhere near as well as we can in the first half but I thought in the second half we were far stronger. The manager made a couple of changes at half-time and that gave us a real foothold in the game.

“It’s a point that looks like a good point if we can get a victory on Friday night. Not many teams have won in Arbroath, I think Inverness might be the only team to do so, which shows how tough it is. We want to make Firhill a tough place as well and get back to winning ways after a couple of defeats.”

“Scott Tiffoney came off early on Tuesday night and he’ll be a doubt for tomorrow night. Scott wanted to play against Arbroath on Tuesday night, he was really keen to get involved as he knew how big a game it was and felt he was fit enough to get through the game. He felt it incredibly early that he wasn’t able to continue and he knows his body better than anybody so we had to bring him off. Everyone else is fit and available for selection for the manager.”

Exclusive video interviews with Robbie Crawford and Thistle assistant manager Alan Archibald will be available for JagZone subscribers to watch today – log in to view.

JagZone subscribers will be able to tune in to live audio commentary for our clash with Inverness CT, starting at 7:15pm – click here to tune in.