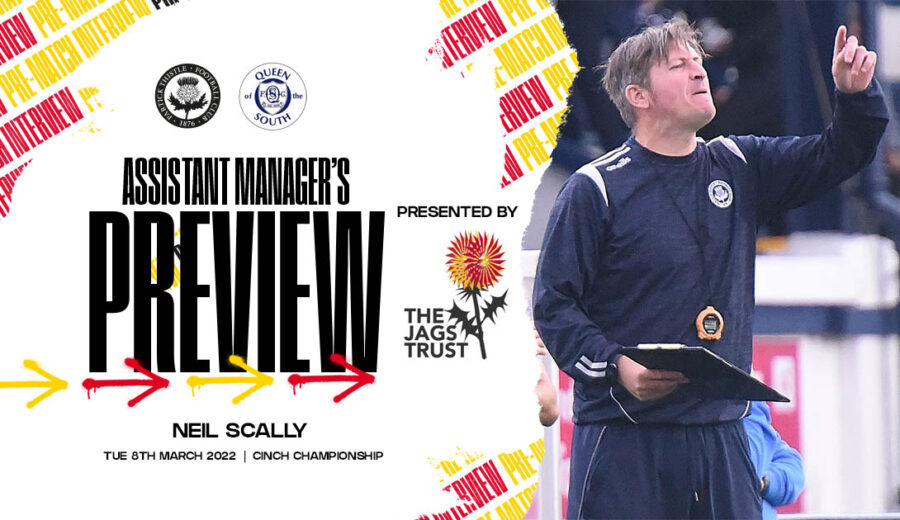 After Kevin Holt’s goal against Inverness last Friday night got them back to winning ways, Partick Thistle will be looking to make it two wins on the trot as they take on Queen of the South at Firhill this Tuesday. It will be no easy task though as the Doonhamers have been in rejuvenated form under the stewardship of interim player-manager Wullie Gibson, winning their last three games in a row without conceding a goal. The teams battled to a 0-0 draw at Palmerston Park the last time they met but Thistle will be hoping to go one better this time round as they seek to move within six points of league leaders Arbroath. Jags assistant manager Neil Scally spoke to ptfc.co.uk ahead of the game:

“We scored late on against Inverness so naturally we can’t wait to get stuck into our next game. It was a great feeling on the night and that was still there when we came back in for training so I think the boys are feeling good at the moment but we need to make sure we carry the momentum into this game against Queen of the South.”

Reflecting further on the victory over the Caley Jags, Neil said it felt good to come out of a tight contest with all three points.

“It was always going to be a tough game because Inverness are a good side but we were really pleased with the way we started the game. We were on the front foot straight away and probably should have been in front by half-time.

“Coming out for the second half, they changed things a bit and were catching us on the break a bit more which led to some chances for them albeit Jamie didn’t have too much work to do. It was one which could have gone either way and we’re just glad we got that goal.

“There have been a few games like that in the last few weeks where we’ve created chances but not taken them and we’ve drawn or lost. At this point in the season the majority of games are going to be close but if we can get into a habit of producing in the big moments like we did on Friday then we’ll be doing well.”

Thistle started March in fifth place but now find themselves in third and Neil says that’s really pleasing to see as Thistle now hope to build towards the top of the table.

“It’s obviously great to see us up in third with a couple of games in hand as well. That’s not the end goal for us though, we want to push further up and the games in hand give us an opportunity to put more pressure on the top two. It’s now up to us to make sure we go and perform in the games we’ve got coming up.”

In terms of our midweek opposition, Scally is expecting a very stern test against a resurgent Queen of the South team.

“Wullie taking over seems to have given them a bit of a lift and they’re playing with confidence at the moment. I don’t really expect them to come here and sit in considering the form they’ve been so I reckon it could be a pretty open game.”

Finally, Neil gave us the latest team news ahead of the game against the Dumfries side.

“We’re the same again for this game with Scott Tiffoney still out. As is always the case at this point in the season there are a couple of other guys carrying knocks but we work closely with the physio to make sure they are managed properly in training and in games.”