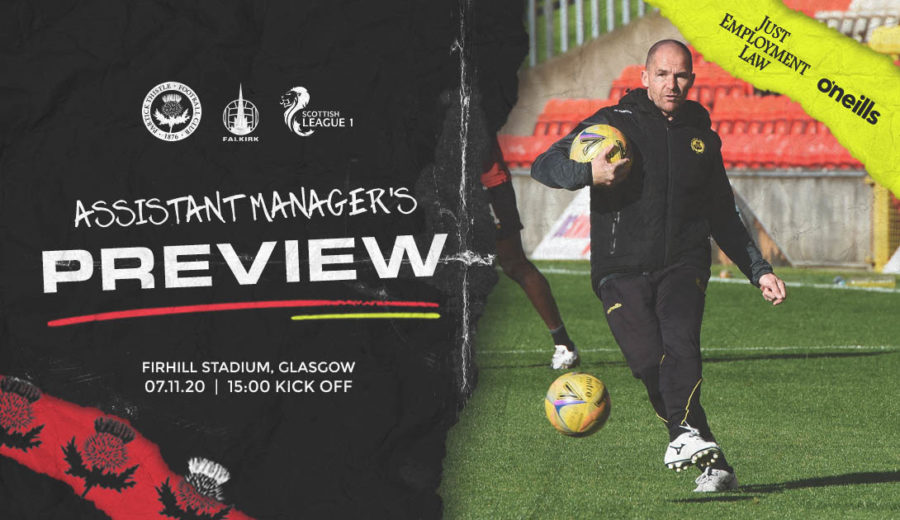 Partick Thistle look to bounce back from a late defeat against Cove Rangers last weekend as they take on Falkirk at Firhill this Saturday. The Jags have taken three points from their opening three games of the League One season but will look to return to winning ways and continue their strong home form as the Bairns visit for matchday four. Thistle assistant manager, Alan Archibald, spoke to ptfc.co.uk ahead of the fixture:

“With the way the fixtures have gone this becomes a very important game for us. We don’t want to see that gap open up between us and the top of the table so it’s vital we get a victory this weekend, particularly against Falkirk who will be one of the challengers for the title.”

Archibald says that the result at Cove was extremely difficult to take for the management and the players but he’s hopeful the team can respond with a positive result against Falkirk.

“The Clyde defeat, I think we weren’t good enough and deserved to lose but that wasn’t the case against Cove. It was a terrible game in awful conditions and I think we were pretty comfortable in the second half especially which made it even worse when that goal went in.

“The manner of it was a sucker punch. Losing a game in injury time after such a hard game where the boys battled really well and probably had the better of it after half time was really difficult but we now come back home where we’ve started well and we believe we can go and win this game to get back on track.”

The Maryhill men now have three straight home games to contend with and Archie is looking for the team to build some momentum in these games.

“It’s a good opportunity to string some results together, without a doubt. The first handful of games were always going to be tough with the way the fixtures were set but now we need to go on a run and there’s no better way to start that than with these three games we have at home.”

The new tier system in Scotland is allowing fans in certain areas of the country to return to stadia in small numbers and although that’s not yet the case at Firhill, Alan is looking forward to welcoming supporters back when the time does come.

“Everyone is desperate to see fans back in the stadium so hopefully it’s sooner rather than later. I’ve noticed it more at away grounds like last weekend when it was a bit eerie, to be honest. I think we’re just about used to it at Firhill at this point but the atmosphere will never fell normal without the buzz of the support.”

Next, Archie gave us updates on Jamie Sneddon and Zak Rudden who both went for surgeries this week to solve issues that had seen them miss recent fixtures.

“Jamie went for his operation this morning so we haven’t actually heard how his went yet. Zak’s was on Wednesday and he came through his fine so now for both of them it’s about getting stuck in to their rehab programs and trying to work their way back to fitness.

“Thankfully we were able to get them in for surgery fairly quickly. As you can imagine, there’s a lot of stress on the NHS at the moment and even going private, it’s tough to get booked in so we’re glad they both got sorted this week.”

Ciaran McKenna is another player who has missed time in the past few weeks and will have to go for surgery but Archibald says that Coronavirus protocols have slowed the process of his recovery.

“His has taken a bit longer because he was going to see a consultant to get a better look at it and you have to actually register a negative COVID test just to get in the door and be looked at so it’s just an example of how everything takes an extra couple of days at the moment.

“It’s the same for everyone obviously but it just so happens that we have a handful of key players out just now and these little things just mean it’s moving a bit more slowly than is typical.”