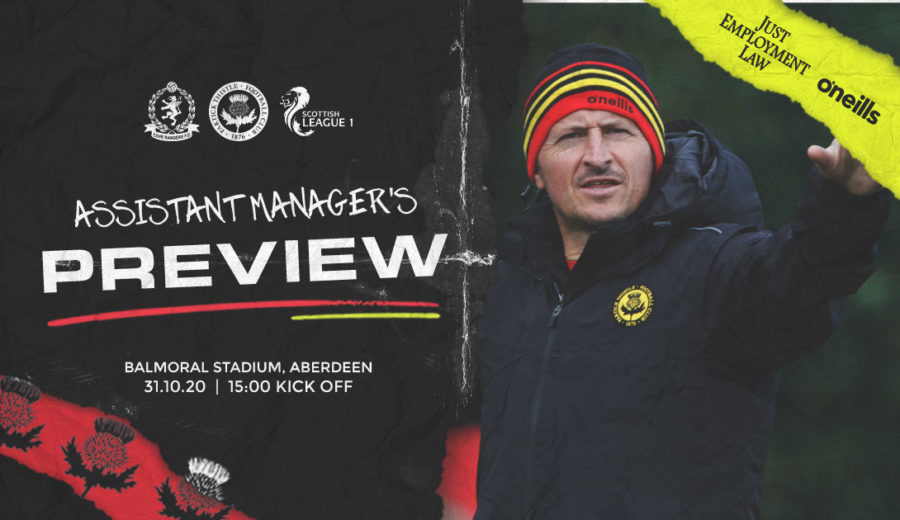 Cove Rangers are this weekend’s opposition for Partick Thistle who are looking to build on last Saturday’s 2-1 win over Airdrieonians at Firhill. The Jags secured their first three points of the league season against the Diamonds but now take on the early leaders Cove, who have six points from a possible six so far. Thistle assistant manager, Neil Scally, spoke to ptfc.co.uk to look ahead to the trip north:

“It’s one of a number of really tough fixtures we’ve got in this opening run but that’s what you expect in this division. They’ve obviously done exceptionally well the past few years so we’re looking forward to the challenge.”

Scally says that after getting the victory over Airdrieonians, the squad are in good spirits ahead of their next game.

“Any time when you’ve won at the weekend, you can feel the atmosphere is completely different on a Monday compared to the atmosphere when you’ve lost. Everyone enjoys things a bit more and it’s just a better place to be for everyone so we now want to make sure we’ve got that feeling at the start of every week.”

Towards the end of the game against Airdrieonians, the Jags had to doggedly defend their box with high balls and long throws aplenty from the visitors but Neil was pleased with the way the team managed to see the game out despite that late pressure.

“You don’t want to be defending like we were at the end of that game but sometimes it becomes necessary and the boys did well in dealing with what was thrown at them. Teams in this league aren’t afraid to go direct and there are lots of aerial battles right throughout a game but especially when your opponents are chasing the game as the case was at the weekend.

“I think if you look at the team, we’re quite well placed to handle those situations. The boys in central defence are great in the air and you saw Brian Graham coming back from up front and doing his bit too.”

Thistle’s two goals against the Diamonds were both well-worked with the first coming from some good running down the right and the second coming as a consequence of speedy back-to-front play by the team and Neil hopes the team will now kick on and start taking their chances more frequently.

“It goes without saying that you’re going to have to score a lot throughout the season so it was good to see Brian get off the mark and then Blair Spittal producing that brilliant strike. They were two good goals but, to be honest, we don’t care how they go in. The key is that we’re scoring and winning games and that was a good start last week.”

Scally then gave us all the team news ahead of our trip to Cove, including updates on the Jags who missed last Saturday’s contest.

“Jamie Sneddon and Ciaran McKenna are no further forward. They’re still being evaluated so we don’t know exactly what the time frame is for them but they definitely won’t be available this weekend.

“Zak Rudden is due to have an operation in midweek so he’s another that’ll miss out. It’s a big blow for us and him because we’re expecting big things from Zak but it’s one we just have to deal with and hopefully his recovery goes to plan and he’s back as soon as possible.

“Ross Docherty and Brian Graham were doubts last week but came through the full 90 minutes so they’ll be available again this week which is massive for us because they’re two of our most experienced players and they have an abundance of quality in their respective roles.”

Kieran Wright and Rhys Breen were called up to the starting XI against Airdrieonians and played their individual parts in the win and Neil says the management team were encouraged by the duos performance.

“They’ve got plenty of talent, the two of them, and I think they just lack a bit of experience which will develop as they play more games. They’ve decided to go out on loan because they want to learn and they’ve got plenty of players around them who they can learn a lot from so hopefully there’s plenty more to come from those two.”

JagZone subscribers will be able to tune in to live audio commentary for this weekend’s clash with Cove Rangers – click here to tune in.