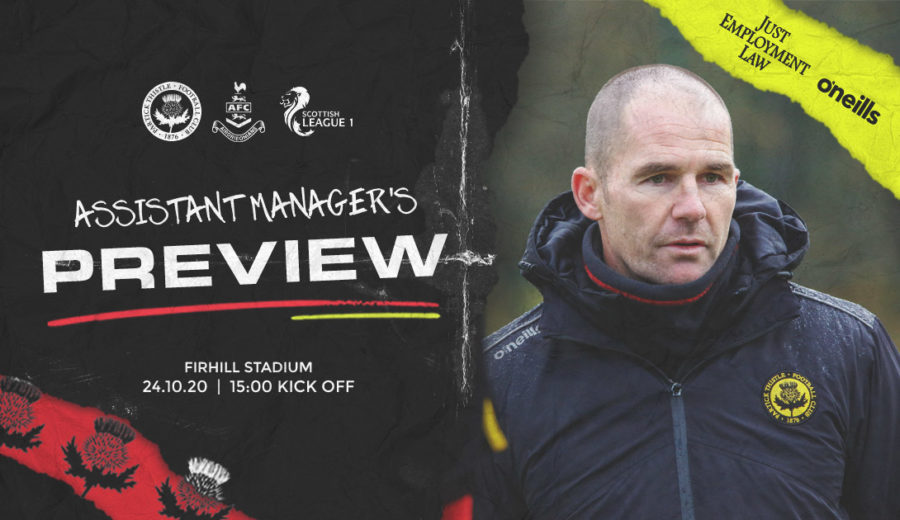 Partick Thistle play their first home league game of the new season this weekend as Airdrieonians visit Firhill. Ian McCall’s side are looking to improve on their opening day showing, which saw them fall to a 1-0 defeat against Clyde at Broadwood, by getting their first points of the new term against Ian Murray’s Diamonds. Jags assistant manager, Alan Archibald, spoke to ptfc.co.uk ahead of the clash starting by touching on the mood of the squad following the loss to Clyde:

“I think everyone was a bit down at the start of the week; players and staff. The result was disappointing but what really hurt was the way we played because we’ve set high standards for ourselves over pre-season and we didn’t play to them on matchday,

“We got that out of our system though early in the week and the boys have trained really well since then to prepare for what’s going to be another tough fixture.”

The Maryhill men weren’t at their best last Saturday but Archie says there are no excuses for that as everyone should have known what to expect.

“We had played much better than that in the Betfred Cup games and the players will say themselves that it wasn’t good enough at Broadwood.

“The manager, Neil Scally and I have all been involved in this league before and quite a few of the players have too so we know how tough it is. Every team we come up against is going to have that same desire to win so we have to make sure we match that ourselves.”

Airdrieonians are this Saturday’s opposition and, having finished third in League One last term, Alan is expecting a difficult game.

“I’ve watched a bit of them and they’re actually very similar to Clyde in many ways. They were a real threat on the attack against Peterhead last week and you can see that blend of guys who know the league and hungry young players with something to prove so we’ll have to be on our game to beat them.”

Archie then gave us an update on team news going into the game against the Diamonds.

“Zak Rudden is going to be missing again. He actually caught his knee during the Queen of the South game and then felt it a bit during training following that game so we didn’t risk him for the Clyde game and he’s now had a scan and is going to see a specialist so hopefully we get good news on that front.

“Tam O’Ware has been back in training a little bit. He did some soft stuff with us earlier in the week and has also been working with Ross the sports scientist and Katy the physio but anything relating to the hamstring requires a lot of patience.”

When Tam does return, the defensive unit will be at full strength and Alan says that added competition will only improve a backline that he’s already encouraged by.

“If we take the last five minutes of last week’s game away because we put Darren Brownlie up front, I think we looked very solid. Darren has been brilliant so far and it was great to see Jamie Sneddon make some excellent saves as well but we do have to be better defending after turnovers because that’s when Clyde were creating their chances.

“Overall, there is good competition in the squad. With the goalkeepers, young Kieran has come in and done well in training then in the centre of defence we have Rhys Breen and hopefully Tam O’Ware very soon to put pressure on the guys that are starting.”