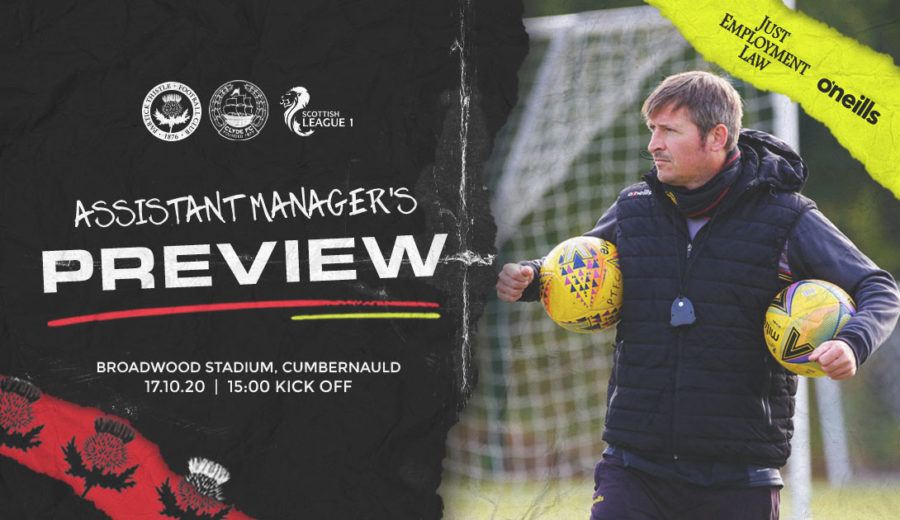 Partick Thistle start their 2020/21 league campaign with a trip to face Clyde at Broadwood this weekend after more than seven months without a league game. The Jags have already returned to competitive action with three Betfred Cup ties against St. Mirren, Queen’s Park and Queen of the South but now look to start the League One term against Danny Lennon’s Bully Wee. Thistle assistant manager, Neil Scally, spoke to ptfc.co.uk to preview the clash in Cumbernauld:

The Jags have amassed five points from their trio of cup games and Scally says the minutes the squad have been able to get in those matches will be invaluable going forward.

“It’s been great to be able to get those games and boost the team’s fitness and sharpness. Also, the way the games have gone has been pleasing for us too. We’ve tried a few different things in terms of formations and personnel and we feel like that aspect of it has been extremely useful for us.”

The Jags have created a good number of opportunities in each game they’ve played so far and Neil says that’s been a source of encouragement for the management team.

“Yeah, we’ve done really well in long spells and looked dangerous going forward. I think even in training, we look really sharp and our ball retention has been first class. The biggest thing is that we transfer that into games and in the first three we’ve had you can see we are transferring those qualities.”

The Maryhill men have kept clean sheets in their last two fixtures and Scally says that defensive solidity has been a focus in pre-season.

“We want to be very strong at the back and be able to build off clean sheets meaning we don’t have to score two or three goals to win a game every week. We’re not going to be at our best every week and if there’s a game where we’re struggling to score, we want to have that base at the back.”

Thistle have already reaped the benefits of their strong squad with Joe Cardle and Mouhamed Niang coming off the bench to contribute to goals against Queen’s Park and Scally says that depth is going to vital throughout the year.

“We feel as if every player we have in the squad is capable of coming on and contributing to the team. It’s something that’s a little bit different compared to last season where we feel like we’ve got lots of different options for how we can play and there’s also plenty of competition for places. It makes it very simple for the players; if you play well you keep your place but if you don’t then you’ll come out of the team.”

Neil gave us an update on the condition of Tam O’Ware who picked up an injury in our friendly defeat by Hearts a couple of weeks ago.

“Tam is just rehabbing the injury at the moment. That’s another reason why our big squad is so important. Last year, if Tam had picked up an injury we would have been struggling to plug that gap but now we have a good number of options in each position and for central defence in particular, we have Rhys Breen and Ciaran McKenna, both of whom are able to step in.

“It’s going to be an intense season and we’re going to have injuries and suspensions so we have to be able to trust every player to come in and play. That’s true of any season and we feel like the squad we’ve built here is one that’s ready to reach our goals.”

JagZone subscribers will be able to tune in to live audio commentary for this weekend’s clash with Clyde. Due to entry arrangements at Broadwood, our audio show will begin at the slightly later time of 2:45pm – click here to tune in.