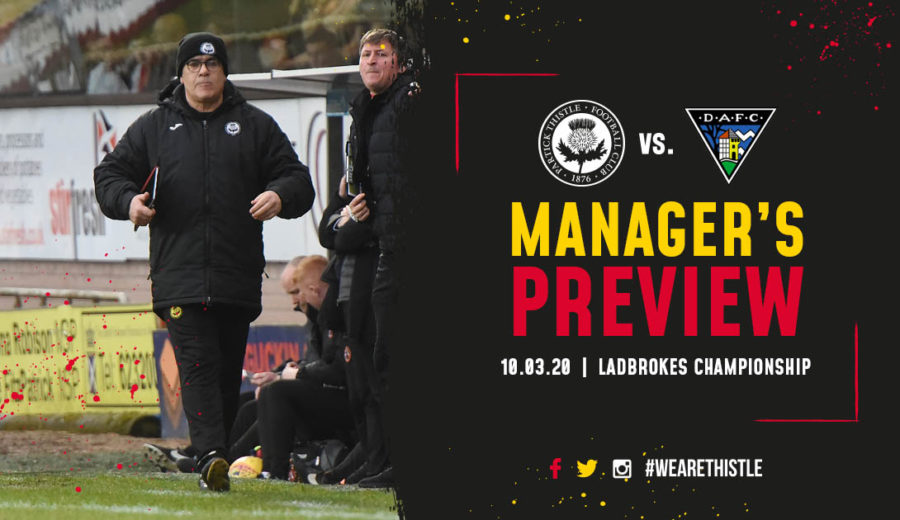 The games are coming thick and fast for Partick Thistle in March and just three days after travelling to Tannadice and taking a point off Dundee United, they now prepare to take on Dunfermline Athletic at the Energy Check Stadium at Firhill. The re-scheduled clash represents a chance for the Jags to move closer to one of the teams just above them with Alloa not playing this midweek. Ahead of the game, Thistle boss, Ian McCall, spoke to ptfc.co.uk:

“The last game and a half has been positive. We’d have loved to have taken more points but we feel we’ve performed really well. We’re far more solid and settled at the back too.

“We came away from the game at the weekend disappointed because we gifted them a goal really. Reece Cole made the mistake but I thought he responded brilliantly and played a terrific game from there on.

“Before they scored, though, we had a couple of great chances and should have at least been one up, however, we were behind at half-time and we did well to get the equaliser quickly and after it went to 1-1 I thought it was a pretty even game overall.”

One of the changes the manager made was bringing Shea Gordon in at right-wing back in a somewhat unnatural role but McCall was pleased with how the number 14 did.

“He’s played there with the Northern Ireland youth teams so we felt confident playing him there. We thought he did well all things considered and he actually picked up a little knock during the game but he was able to train with it. He gives us a different sort of option in that area.”

Although the side weren’t satisfied with just a point from Tannadice, Ian feels if they can get a win on Tuesday then the draw will look a lot better in hindsight.

“That’s so often the case. Going away to the league leaders and getting a point would usually be a very decent result but we need wins. I think the two games last week were a step forward in terms of performance but we have to then take the step after that which turning performances into victories.

“It’s a big week overall for us. You have to make the most of home games at this time of the season and we feel like if we can continue to perform the way we have over the last two and just be a bit more clinical in front of goal then we’ll be able to string some good results together.”

To finish, the gaffer gave us the latest team news ahead of the Dunfermline meeting.

“As I said, Shea had a knock on Saturday but was able to train. Joe Cardle has been back training with the group but I think it will be too soon for him and Ryan Williamson is still out.”