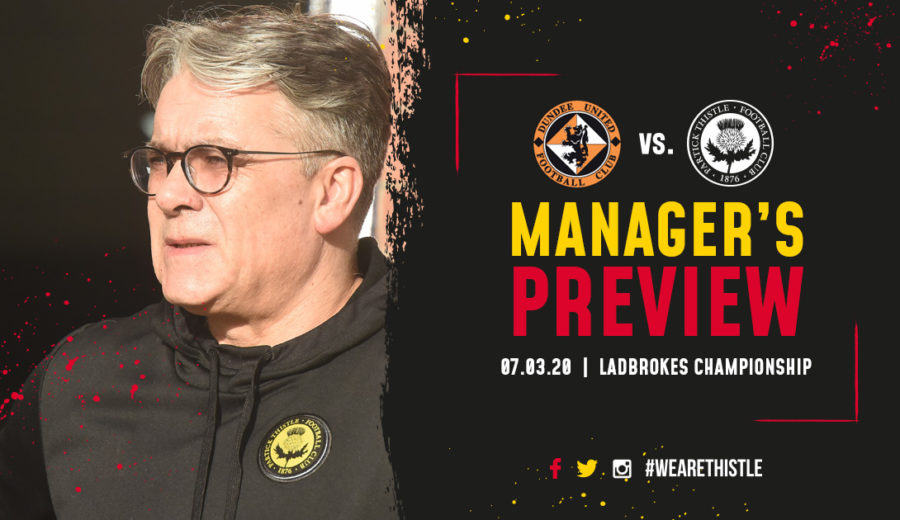 It was a frustrating night for Ian McCall on Tuesday as his Partick Thistle side drew 0-0 with Queen of the South in the Ladbrokes Championship. The result did represent the Jags first league clean sheet of the season, however, after numerous missed chances in the second half, it felt more like two points dropped than one gained for Thistle against the team directly above them in the table. Now, it’s a trip to Tannadice for the Jags as they seek three points against the runaway league leaders, Dundee United. McCall spoke to ptfc.co.uk ahead of the contest:

“I had a meeting with the players on Thursday where we discussed the game. I thought the first half was average. There was a nervousness but I thought in the second half we did really well. We’ve got to ignore the noise about how we played and look at the facts; we created 8 opportunities to score a goal, hit the woodwork three times and were denied a penalty that should have been a penalty.

“Overall, there were a lot of positives to take. We looked a bit more creative when Reece Cole came on and it was a game we definitely we should have won.”

Probably the biggest talking point of the match ended up being an incident late in the game when Thistle were awarded a penalty as Callum Semple brought down Dario Zanatta in the box before the referee went back on his decision and, after discussions with his assistant, called it back for offside. Replays of the incident seem to show that Zanatta was in fact onside but McCall says he understands that errors like those can be made.

“I think it is clear that Dario was on. When I went to see the referee and assistant referee after the game I wasn’t going mad at him because we all make mistakes. They made the wrong call, but in real time it would have been tight. Since I’ve been back in management I’ve made 100 mistakes at both Ayr and Thistle so it’s just part of life. Ultimately, if we had taken our chances from open play then we wouldn’t be talking about it so that’s what we can improve.”

Lewis Mayo made an impressive debut in the draw with the Doonhamers, winning the Man of the Match award as he helped the team to an important clean sheet and McCall was very impressed with how the youngster worked as part of the defensive unit.

“The two centre backs on either side are quick. When you play three at the back you need that and I think both Lewis and Darren Brownlie equipped themselves well there.

“Lewis is a great type of boy, which will stand him in good stead throughout his career. There are players who might have better ability that don’t have his attitude. He was steady defensively and he had a great chance to score so he couldn’t do much more than that. He’ll play against Shankland this weekend having faced Dobbie and there are no better strikers outwith Rangers or Celtic so it is a great learning experience for him.”

It’s the table-topping Tangerines up next for the Maryhill men but Ian is adamant that his team can’t be fearful of Robbie Neilson’s side.

“We have to go into it with a positive mind-set because we need to pick up points. We don’t blame anybody else for that, it’s the position we’ve put ourselves in. We won’t get as many chances up there as we did on Tuesday so we have to make sure we take them when they come.”

This Saturday’s game will be the second of seven in a hectic March for the Jags and the manager admits that preparations are a bit different when there are so many games back-to-back.

“We’ll probably have to freshen the team up with all the games in March. You have to incorporate recovery into your training schedule but if you ask players they would rather play games twice a week than train all week for a game on a Saturday. We just need to get that win to kick us on in this run of fixtures.”

Zak Rudden made his return from a month-long injury lay-off against Queens, managing 71 minutes but Ian says it will take time for him to hit full power.

“He just needs games. He has only played against Celtic for any sustained time, he picked up his injury and had a short run out against Ayr. We got him 70 minutes which was great and we’d look to build him up. I think he looked very lively on Tuesday and he’s got potential to be really big player for us.”