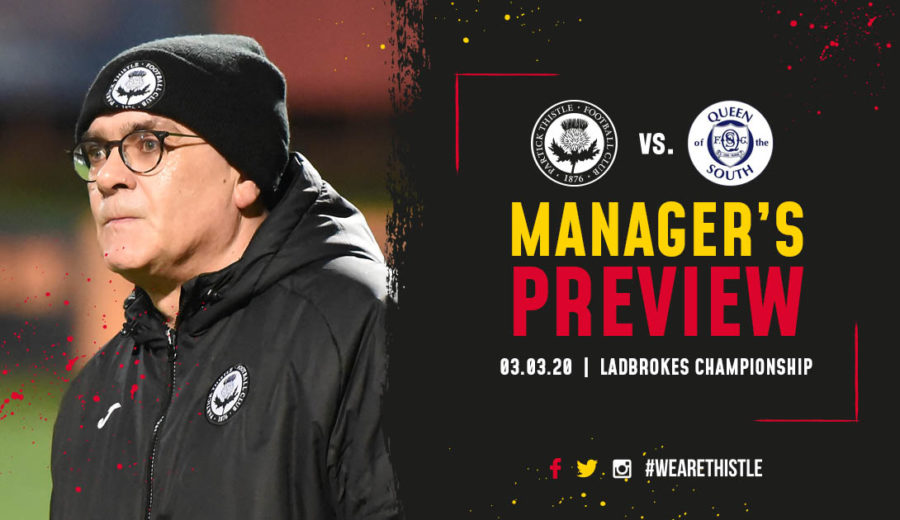 Tonight’s game against Queen of the South marks the start of the final third of Ladbrokes Championship action for the 2019/20 campaign. A hectic March begins with the big midweek visit of the Doonhamers to Maryhill. Thistle manager Ian McCall spoke to ptfc.co.uk ahead of the match.

“We’ve got a third of the season to go and every single game will be crucial. Tonight’s match against Queen of the South is a big one but so is Saturday’s against Dundee United and our two home games next week.

“There is no getting away from the fact it is a big game for both clubs. It is two teams who are currently out of form but you’ve seen teams throughout Scottish football who pick up one win and then they go on a good run of form. We can only think about ourselves and go out to try and win the three points.”

Thistle haven’t been in action for a couple of weeks but the Jags arranged a bounce match against Rangers last week to keep the side ticking over during the enforced break.

“We had a bounce game against Rangers which was good because it allowed one or two players who we feel might be very important to get them fit and get them minutes on the pitch. We haven’t played a league game since the 8th of February and in our cup tie against Raith Rovers we had players who were cup tied or injured. Dario Zanatta grabbed a double which will be good for his confidence.”

It is a busy month for the Jags with a number of midweek fixtures in March but the gaffer is firmly focused on tonight’s clash with Queen’s.

“We’ve got seven games in March, which is something that means we’ll have to use our full squad throughout the month. We’ve got four of the games at home but we can’t focus on any of that yet, we’ve just got to look ahead to tonight’s game against Queen of the South.”

Finally the gaffer brought us up to date with team news.

“Zak Rudden is fit. Whether he would last a whole match, I not quite sure. He’s only ever played for us against Celtic for a sustained period of time. The physio has done great with him and he has now got a week of training under his belt. He is a player our supporters will really take to, and I think you could see that with his debut for us in January.

“It’s only really Joe Cardle and Ryan Williamson that are missing through injury for tonight’s game.”