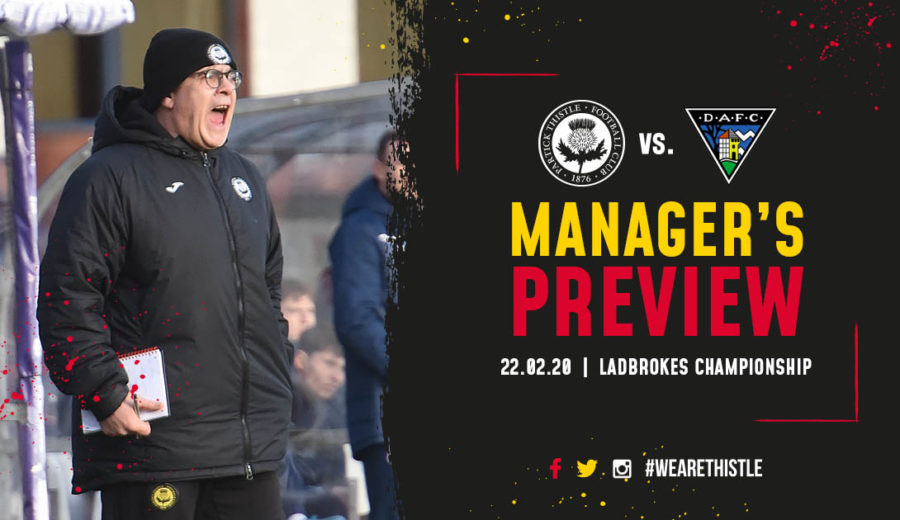 Given recent weather conditions and the current forecast for the next 24 hours, there will be a precautionary pitch inspection at 10am tomorrow morning ahead of our Ladbrokes Championship fixture against Dunfermline Athletic.

Following their Tunnock’s Caramel Wafer Challenge Cup defeat to Raith Rovers last Friday, Partick Thistle return to league action this weekend with a Ladbrokes Championship clash with Dunfermline Athletic at the Energy Check Stadium at Firhill. The Jags are still looking for their first victory of the New Year with points badly needed to move off the foot of the table. Thistle manager, Ian McCall, spoke to ptfc.co.uk ahead of the clash:

“There’s a third of the season to go now and we can’t beat around the bush, we have to start winning. It’s as simple as that. The bottom line is that we can talk all we want but that won’t win us points, we need to go out there and perform.

“We have to be able to do every part of the game well. You’ve got to dig in and be prepared to play some ugly stuff at times because it is just about winning. It doesn’t matter a jot how you play.”

This weekend’s game is the first of two back-to-back at home for the Jags and McCall is keen to make the most of those games.

“We’ve got Dunfermline this weekend and then Queen of the South in ten days’ time so it’s a big chance for us. When you’ve got two home games in a row, you’ve got to take advantage of that and get points in the bank.

“I’ve been in these sorts of runs before and one result really can change things. We’ve gone so long without a win that just getting that taste of a victory would be a huge boost and then you can look to build something from there but you have to clear that first hurdle before anything.”

And clearing that hurdle is the manager and players’ number one focus according to the gaffer.

“As much as we’d like to talk about going on a run, we have to take that first step as I’ve said. We have to take the right steps and step one is winning this weekend against Dunfermline. Once we’ve done that, we can look towards Queen of the South and beyond but for now, it’s just about Saturday.”

McCall then gave us an update on squad fitness ahead of the weekend’s fixture.

“Joe Cardle, Steven Saunders and Ryan Williamson will all miss out. Zak Rudden’s done a bit of training but I’m not sure that we’re going to risk him. He joined in a bit with the squad today but the fact that the next game after this one is ten days away means it might be right to wait and have him at 100% for that one.”