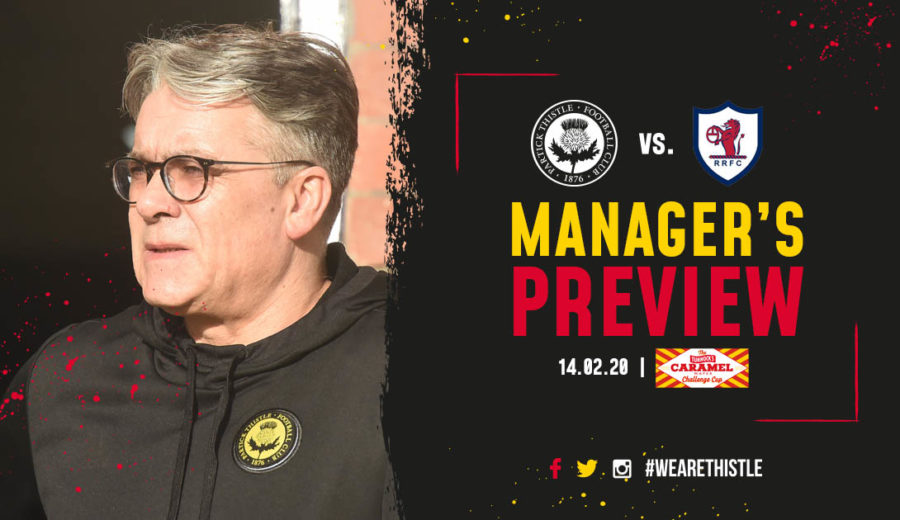 Thistle take on Raith Rovers in the Tunnock’s Caramel Wafer Challenge Cup tomorrow evening with a slot in the final at stake for both sides. Thistle manager Ian McCall spoke to ptfc.co.uk ahead of what could be a big night for the club.

“It’s an opportunity to get to a national cup final and that doesn’t come along too often. Our club hasn’t won it before and I think Alan Archibald’s team got to a final one year. We’ve reached a couple of semi finals before and when you get to this stage of the competition it’s great. When you get to the semis and the final, you want to go on and win it.

“If we get to the final we’ll probably take 5 or 6 thousand fans to the game and it will give everyone at the club a boost. It’ll be the same for Raith though, they’ll know what it presents. They will be as determined as us to reach the final so we know it’ll be a hard game.”

The gaffer knows that Raith will present a formidable task with the Fife club flying high in League One.

“I know it is different leagues but there is only one place between us if you look at it that way. I’ve got a lot of respect for John McGlynn and what he is doing at Raith. They will be very well organised so it won’t be easy. They’ve got two very experienced strikers who have done a lot in the game so it will be a very tough game.”

With home advantage in the tie, Ian is looking for Thistle to take the initiative in the tie.

“In our last home game against Ayr United we did well and probably should have won the game. We’re at home and the onus is on us to go and win it but Raith will be full of confidence with the league campaign that they have had.”

The manager is under no illusions the influence an appearance in a Cup Final can bring to the entire club.

“If we can get to the final it’ll give everyone at the club a lift, most importantly the supporters. They’ve had a tough couple of years and it would be a day for them to look forward to. We’ve got a big task ahead of us and we hope to use that as a catalyst but it will definitely be a tough game.”

Finally the gaffer updated us with team news.

“We’ve got a few of the new players that are cup tied and we’re still waiting for Zak Rudden to get fit. There will be three or four boys that we hope will go on to be regulars missing so it gives others a chance.”