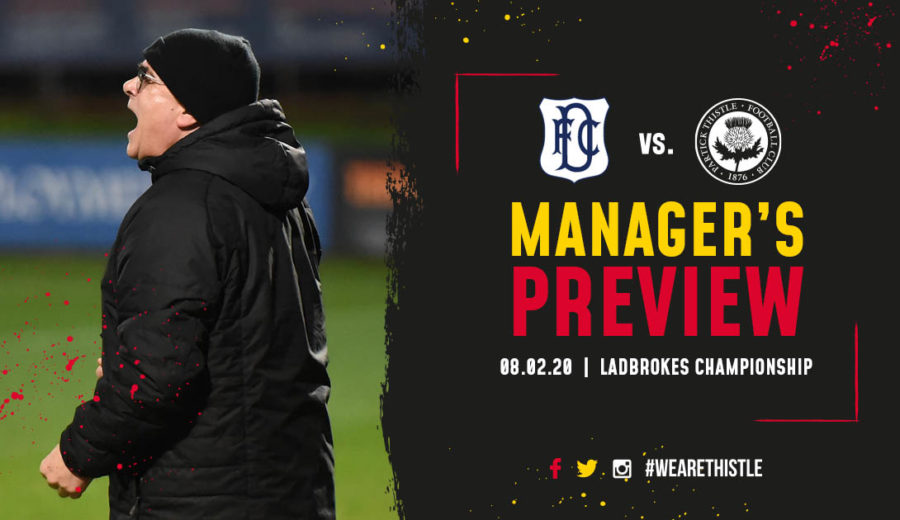 Partick Thistle look to secure another big victory at Dens Park as they take on Dundee for the third time this season this weekend. Last time they travelled to face the Dee, three goals in five minutes saw them earn a dramatic comeback victory against James McPake’s side but the Jags will probably hope for a more comfortable triumph this time with the need for points growing every week. Jags boss, Ian McCall, spoke to ptfc.co.uk to preview the fixture:

“For us, we need to get wins on the board. I think it’s the same for a lot of teams in the league just now; it’s points over performance. Last Friday, we felt we performed well enough to win without getting the points and we can’t let that happen over and over again.

“We created some decent chances and limited them to very little on the night but ultimately we’ve come away with one point and it really felt like we’d missed out on a good chance for all three so it’s up to us to make sure we take advantage in games like that.”

With the January transfer window now done and dusted, Ian is hoping that his new additions will really improve the side as the weeks go on.

“The Ayr game was our first with all the signings in place and I thought they equipped themselves very well. Brian Graham got another goal and he’s looking good already. We looked more assured at the back overall too so we think we’ve improved the team but now we have to show that by getting those points.”

Looking back at the last time his side went to Dens, McCall is desperate to replicate the result as he looks to lift the team off the bottom of the Championship table.

“It was a funny game, that one. We were poor in the first half and were lucky to only be one down but we made a couple of changes at half-time and looked much better after the break, getting goals at a good time; right at the end of the game. It was a great day for the players and for the travelling supporters.”

Although the Jags find themselves in a perilous position at the moment, the gaffer says he’s not panicking with plenty of games still left to play.

“I’ve been in football too long to be panicking. We’re not in a good spot at the moment and I don’t like that we had to do so much work in January but we’ve got a long way to go this season.”

Ian then gave an update on the squad fitness ahead of this weekend’s game.

“Zak Rudden’s had a scan and is going to miss two or three weeks at the most but definitely won’t be in the squad this weekend. Lewis Mayo and Ryan Williamson are both also out at the moment. Apart from that, everyone is fit.”