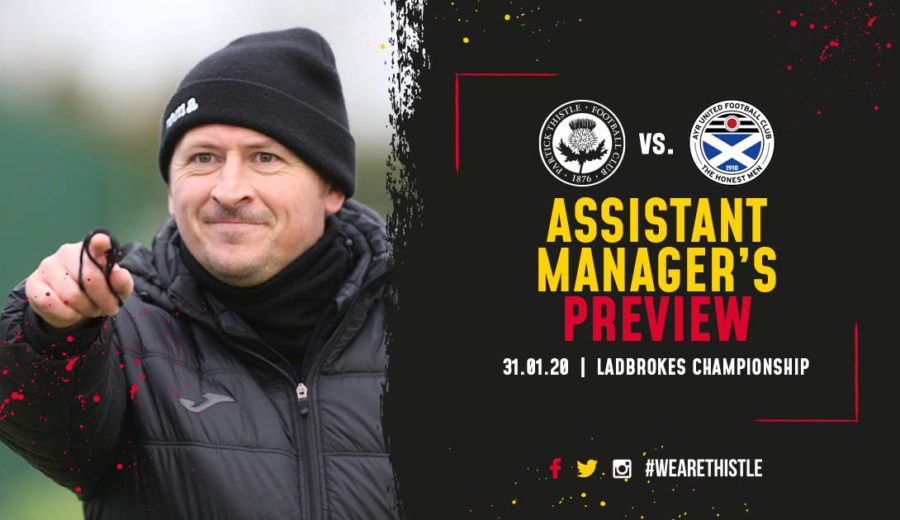 After a month full of activity at Partick Thistle, it’s almost the end of the winter transfer window. The playing squad has seen a lot of changes over the past few weeks and now it’s time for those changes to pay dividends as Ayr United come to Maryhill. Moved to a Friday night for television, all eyes will be on the home side to see if they can get to winning ways and lift themselves off the bottom of the table, bolstered by their new arrivals. Thistle assistant manager, Neil Scally, spoke to ptfc.co.uk ahead of the crucial Championship fixture:

“It’s a huge challenge for us this week but it’s one we have to be up for. They beat us pretty easily last time so we want to see more fight from the players. We know what kind of team we’re going to be up against and we need to be ready to face them head on.”

Having managed to end 2019 in a good vein of form, the Maryhill men are now four games without a win in 2020 and Neil admits that this month has been a disappointing one on the pitch for the team.

“It’s been a poor month for us. We weren’t good enough against Dundee United but losing to them and Celtic are results you can get past; the real disappointment for us was the game at Arbroath last week.

“We didn’t deal with the conditions at all and over the game they absolutely deserved the win. Also, both goals are from set pieces which is very frustrating and something that we’ve done extra work on this week to try to remedy.”

Thistle secured the signing of centre-half, Darren Brownlie, on a two-and-a-half-year deal earlier this week from Queen of the South and Scally says that was a deal that the management team were delighted to get over the line.

“It’s good that we’ve been able to get Darren in early because he’s someone who we’ve admired for a while. I think we saw that first hand when we played Queens here; he scored a great goal and defended excellently to make sure they got their clean sheet so he’s a great player to be able to add to the team.”

Brownlie’s arrival brought the number of incomings to seven for January and Neil says he’s not sure if there will be any more to come before the deadline.

“I mean, that could be us done and dusted. It’s possible that there might be one more to come in but it would have to be a good fit because we don’t want to just sign players if we don’t think they can improve the squad.”

With this match against Ayr representing the final game before the window shuts, Scally hopes that the Jags can now start to put some wins together as they head towards the business end of the Championship campaign.

“We’re now at a point where we more or less know what we’ve got to work with for the rest of the season and hopefully that helps us to settle. There’s been a lot of outs and ins over the last few weeks but now we can focus on getting results with this group.

“That being said, we can’t afford to need too much settling time. We need to start picking up points as quickly as possible especially with what happened at Arbroath so that starts with the Ayr game on Friday night.”

The assistant manager then gave us an update on one of the new faces, Zak Rudden, who had to pull out of last week’s starting XI after picking up an injury in the warm-up.

“Zak’s been in with the physio this week and looks like he’s going to be 50-50 for the game. We want him back as soon as possible but we have to be careful that it’s not aggravated and becomes a more long-term issue.”