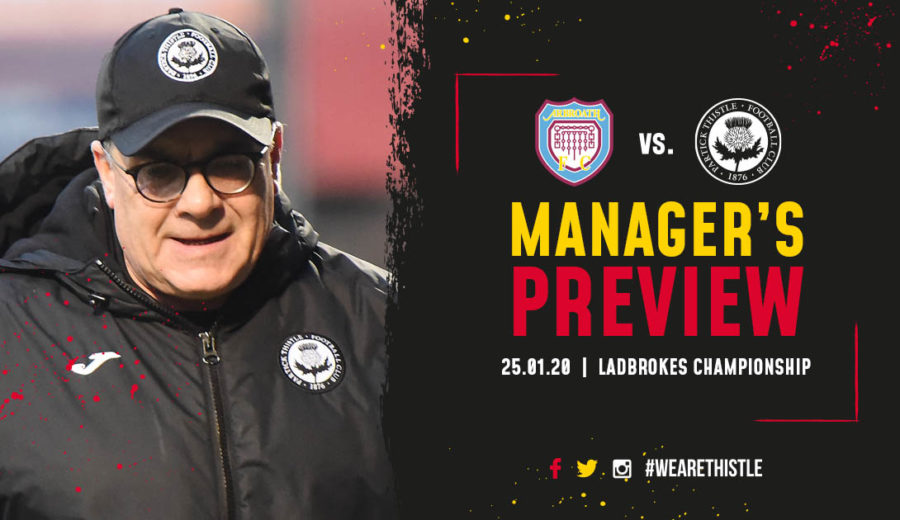 It’s been a busy January transfer window for Thistle manager, Ian McCall. Five new players signed, two new contracts agreed and a loan deal extended until the end of the season have made for a very exciting month as far as the Jags are concerned and now they’re looking for all that hard work to pay off as they take on Arbroath in the Ladbrokes Championship. Thistle have been unable to beat the Red Lichties in two attempts so far this season with the teams drawing back in September before Dick Campbell’s side came to Maryhill and won 3-1 in October. Now, with just three points between the sides, the third edition of this clash could prove to be the most important one yet as the two sides look to distance themselves from relegation trouble. Jags boss, Ian McCall, spoke to ptfc.co.uk ahead of the fixture:

“Arbroath are going to be really tough to beat. They’ve been incredible for a couple of years now. Even the season when we won the title with Ayr, they looked like a team who could go on and win the title and that’s exactly what happened.

“They’re really solid at the back and they’ve got some talented boys up top so we’ll have to be on our game to beat them but that’s ultimately the aim because we need to get back to picking up points.”

The Angus side added Craig Wighton to their ranks this week on loan from Hearts and McCall feels the 22-year-old could prove to be a great capture for Arbroath.

“Wighton’s a very good player and still young. He’s obviously struggled for game time over the past few years so a loan move will be good for him. He burst onto the scene with Dundee but everything has stalled a bit for him and now it’s up to him to make an impact during his loan.”

Thistle haven’t met this Saturday’s opposition since October when they beat the Jags at the Energy Check Stadium at Firhill and the manager is hoping for a much improved performance from that day.

“We were the architects of our own downfall that day. We struggled to keep a hold of the ball and quite a few of our guys had an off-day. The team that plays this time will probably be very different to that one so we’re hoping that the guys we’ve brought in will make a difference.”

One of those new players looking to make an impact will be Brian Graham who became the latest arrival in Maryhill on Thursday as he penned a two-and-a-half year deal with the club, joining from Ross County and McCall was very pleased to get the deal done.

“I’m delighted that he’s here. I’d been talking to Ross County for a number of weeks and credit to the guys up there for helping to get it across the line because I think he’ll be a big player for us. He’s proven in the top flight and the Championship as a goalscorer and is the type of striker that I feel we need.

“He’s a two-time Championship winner too so that sort of experience is very valuable and, on top of everything else, he’s the right type of person. He’s a winner and to get him for two and a half years is brilliant.”

The manager ended by discussing whether there would be more business done before the transfer deadline on 31st January.

“I think there will be more. There might be one or two others leaving. Gary Harkins was told today that he’s free to leave the club and I did that with a heavy heart because the supporters will remember Gary’s first spell here when I worked with him and I’ve seldom worked with a more naturally gifted player but I think that’ll happen within the next few days.

“Lewis Mansell has a little knock at the moment but we’re hopeful he’ll be able to go out on loan which will be good for him but that injury has just pushed that back a bit.”