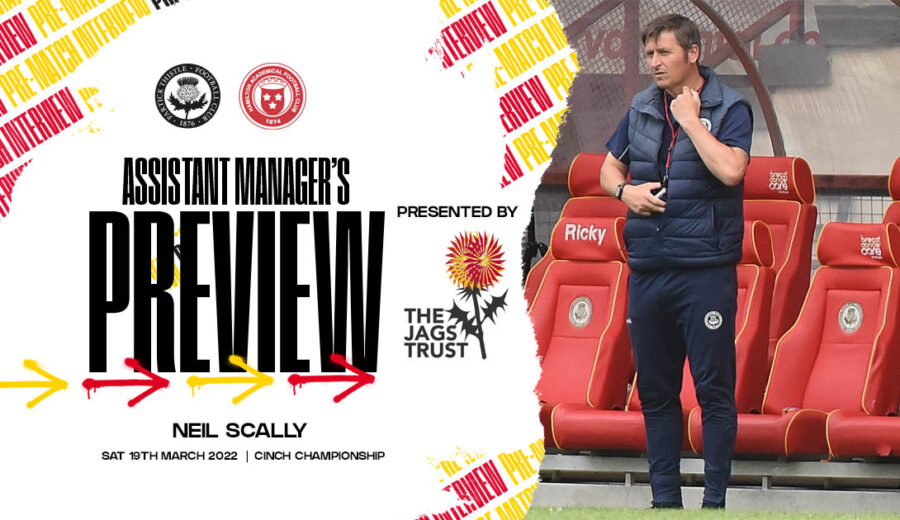 Following a frustrating defeat at the hands of Greenock Morton, Partick Thistle return to Firhill against Hamilton Accies with the Jags hoping to regain momentum ahead of the cinch Championship run-in. Jags assistant manager Neil Scally sat down with ptfc.co.uk to break down the clash:

“We’re looking forward to getting another game, putting last weekend behind us and starting a new run. Obviously everyone was gutted with the way we lost at Cappielow last weekend but it’s done now and we have to look to bounce back quickly.”

Neil reflected on last weekend’s loss to Greenock Morton and mulled over what went wrong.

“I think we started really well, actually. We had a good goal early on and we deserved the goal at that point in the game but as it went on we didn’t kill the game off and we didn’t play well in terms of possession.

“They put us under a lot of pressure from long balls and long throws and as the game went on they managed to get a couple of goals to flip the game on its head.

“The boys have played a lot of football over the past three weeks or so and I think that finally started to show in that second half. If we could do it again, we’d probably have made more changes earlier but we can’t change what happened now.”

Neil told us about the impact having a midweek without a game has had on the players.

“That was possibly the most frustrating thing about Saturday. We knew if we got through that game then we had a week to recover and we were in a great position. Unfortunately we couldn’t get that result but we’ve still had that extra bit of recovery time which I reckon should serve us well.

“We kept things light at the start of the week and ramped things up on Thursday so the boys should be refreshed come kick-off this weekend.”

Scally spoke about the importance of bouncing back with a positive result against Hamilton following defeat in Inverclyde.

“The games are now beginning to run out. We’re not too far off but you can’t afford two slip-ups in a row realistically so it’s a big game against Hamilton.

“I look at the way things are set up and I think everyone is going to be dropping points between now and the end of the season so it might come down to who can stay the most consistent and scrape wins that other teams can’t. Prior to Saturday we’d been doing that well so we need to get back to it.

“We’ve had close games against Hamilton the last two times and I think you have to expect more of the same this time. Every team in the league has shown an ability to pick up big results so it’s really difficult to predict what’s going to happen. All we know is that we’re good enough to win any game when we’re at our best so hopefully we’ll see the boys back on top form this week.”

Neil also shared an update on the team news ahead of tomorrow’s game.

“Richard Foster has picked up another little knock which will probably mean missing some time which is a blow. Scott Tiffoney is still out although he’s been making progress and has started doing some running so we’re hopeful he won’t be too much longer.”

Exclusive video interviews with Cammy Smith and Thistle assistant manager Neil Scally will be available for JagZone subscribers to watch today – log in to view.

JagZone subscribers will be able to tune in to live audio commentary for our clash with Morton, starting at 2:30pm – click here to tune in.