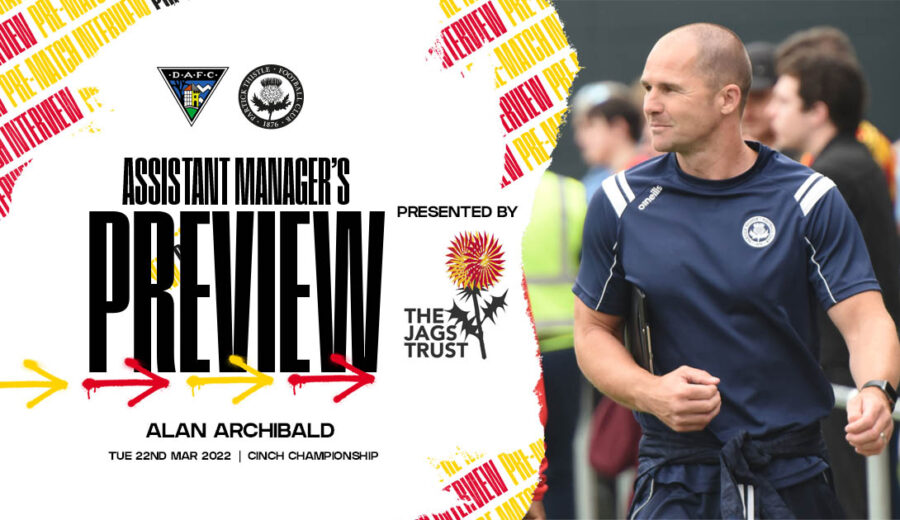 Partick Thistle will look for an immediate reaction to their 4-0 defeat by Hamilton as they travel to East End Park for some Tuesday night cinch Championship action. The Jags can jump back into third place with a win as they play their final game in hand of the recent fixture backlog. Dunfermline, winless in six games, haven’t scored in their last three games against the Maryhill men having scored four in one match at Firhill at the beginning of the season. Jags assistant manager Alan Archibald spoke to ptfc.co.uk ahead of the contest:

“It’s ideal for us because Saturday’s result was such a sickener that you just want to get stuck into the next game and we’ve only got to wait three days. As a unit, we all know that the Hamilton game was unacceptable so now we’ve just got to do our best to get past it and get back on track.

“It’s one that you want to just forget about but at the same time we have to look over it and try to learn from those mistakes to make sure they never happen again. We don’t want to go overboard though because we’ve had a stretch of four or five months where mistakes like those have been extremely rare.

“We’ve lost games this season and last season but I don’t think we’ve been as well beaten as that to be honest. It started badly and we didn’t react to that so we can have no complaints at all about the result. There’s still a lot to play for though so we can’t let it hang over us.”

Despite the heavy defeat to Stuart Taylor’s side, Archie did mention one positive from the afternoon – Ben Stanway making his league debut for the club.

“It was an awful day overall but we were pleased to get Ben onto the pitch. He’s been in training with the first team for some time now and he’s definitely earned the right to be in the matchday squad.

“It wasn’t exactly the ideal situation for him to come on to but getting his first chance to play some Championship football will have been a useful experience for him. Now we want him to kick on and give us reason to play him some more.”

Now, looking ahead to the game against Dunfermline in Fife, Archie says he’s expecting a difficult game against a team who are desperate for points.

“They’re bottom of the table at the moment but from what I’ve seen they potentially could have had more points than they’ve got from a few games recently. That was certainly the case for them against Morton last Friday when they were dominating the game but couldn’t quite find the finishing touch.

“They keep the ball quite well which is what you expect from a John Hughes team and on what should be a good surface at East End Park, we’ll be looking to do the same. It’s a game in hand for us but there’s some pressure on it because of the last two results.”

There was a long list of absentees on Saturday afternoon with a number of key players missing for the game against Accies and we got Archie to give us an update on each of them.

“So, firstly, Alex Jakubiak looks like he’s going to miss out. He injured his groin in the warm-up on Saturday and had to pull out less than ten minutes before kick-off which was a blow. We’re hopeful that he’ll be back available for Kilmarnock but he probably won’t be involved tomorrow.

“Brian Graham and Connor Murray were both ill last week so they have a chance for tomorrow but it depends on how they feel when they wake up. They’re both guys who’ll be keen to play a part if they can but we have to consider their health and whether they’d really be able to give 100% if they’re not feeling well.

“Richard Foster has been managing a knock for while now but it looks like he could be available for Dunfermline. He fought through the injury to play at Cappielow and that set him back a bit but he’s been feeling a bit better the last couple of days.

“Scott Tiffoney is another one who’s been dealing with an injury for a while and obviously he’s missed a number of games for us now. He did some training towards the end of last week and got another good session today so he should be in the squad tomorrow which is a boost for everyone.

“Kyle McAllister is the last short term injury that we’ve got at the moment. He felt an issue in the warm-up against Queen of the South and went back to St. Mirren to get it looked at. Since then the physio at St. Mirren and our physio Jordan have been working together to get him back and we’re looking at a couple of weeks out for him.”

An exclusive video interview Thistle assistant manager Alan Archibald will be available for JagZone subscribers to watch today – log in to view.

JagZone subscribers will be able to tune in to live audio commentary for our clash with Dunfermline Athletic, starting at 6:35pm – click here to tune in.

This game is being broadcast live on the BBC Scotland channel.