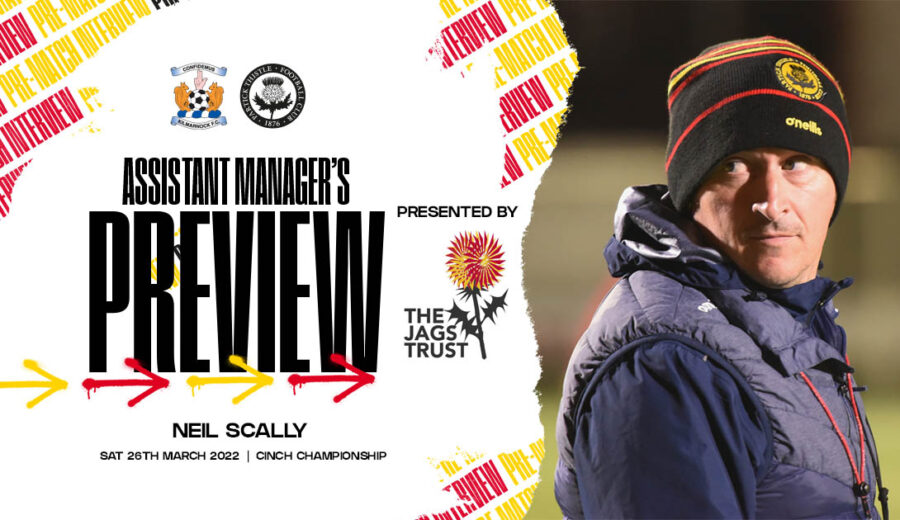 With six games to go of the cinch Championship season, Partick Thistle travel to Rugby Park to take on league leaders Kilmarnock. The Jags missed the chance to move into third place in midweek as they were beaten by Dunfermline at East End Park while Kilmarnock were 2-1 winners against Queen of the South in their last fixture. Thistle assistant manager Neil Scally spoke to ptfc.co.uk ahead of the trip to Ayrshire:

“It’s been a difficult couple of results for us and we’ve dropped below the levels that we’ve set for ourselves this season which has been really disappointing but there is still a lot to play for.

“Coming into this season the aim was always for us to go and challenge for the play-offs and we’ve done that. We’re sitting in fourth place and it’s in our hands as we head into the run-in.

“That being said, we know the past couple of results have been unacceptable and if we continue to perform like we have in those games then we’ll struggle to stay in fourth place. That’s why we’re keen to get back on the right track this weekend and then move into a full week of training next week.”

When looking back on the defeats to Hamilton and Dunfermline, Scally thought that the Jags’ inability to do the basics right had cost them.

“This season in general we’ve been pretty sound defensive and mistakes have been rare but in the last two matches we’ve made basic error after basic error and when you do that, you’ll be punished.

“On Tuesday, we went ahead and conceded within the first ten minutes and then for the next 20 minutes we were sloppy and allowed Dunfermline to keep the pressure on us which is ultimately what decided the game. Losing eight goals in two games is unlike us so we need to get back to doing the basics right.”

Now, Neil says the team have to try to get past their defeats to Accies and the Pars so they can make a positive push towards the end of the season.

“As I said earlier, we still have plenty to play for. When you’ve lost games like we have this past week the best way to put it behind you is to get stuck into the next game.

“Hopefully the players remember that it’s been a bad week in what has been a good season for us overall and there’s still time for us to bounce back. That starts at Rugby Park this weekend”

Taking on the league leaders is no easy task with Derek McInnes’ side unbeaten in six league games but Scally still believes the team can produce a result.

“They’ve been very good in recent weeks and that’s why they find themselves at the top of the league. There’s no shortage of quality players in their squad but we played them in January and felt we were the better team that night so we can take confidence from that.

“It’ll be a tough game but you have to believe in yourself. We seem to play quite well on the artificial surfaces and theirs is one of the better ones so we’ve just got to go out there and try to get a result.”

Finally, Neil gave is the latest team news ahead of the game against Killie.

“With the games coming one after another at the moment, the guys aren’t getting much time to recover so we’re still going to be a bit light this weekend although we’ll still have a strong starting line-up out there.

“That’s why we’re looking forward to having a full week of training next week. It’ll give us a chance to get a few players back from injury and give everyone else the opportunity to recover well and then get some more consistent training in their legs.”

An exclusive video interview with Thistle assistant manager Neil Scally will be available for JagZone subscribers to watch today – log in to view.

Kilmarnock will be providing a pay-per-view option, priced at £12.99, for any supporter who wishes to watch a livestream of the match – click here to purchase.