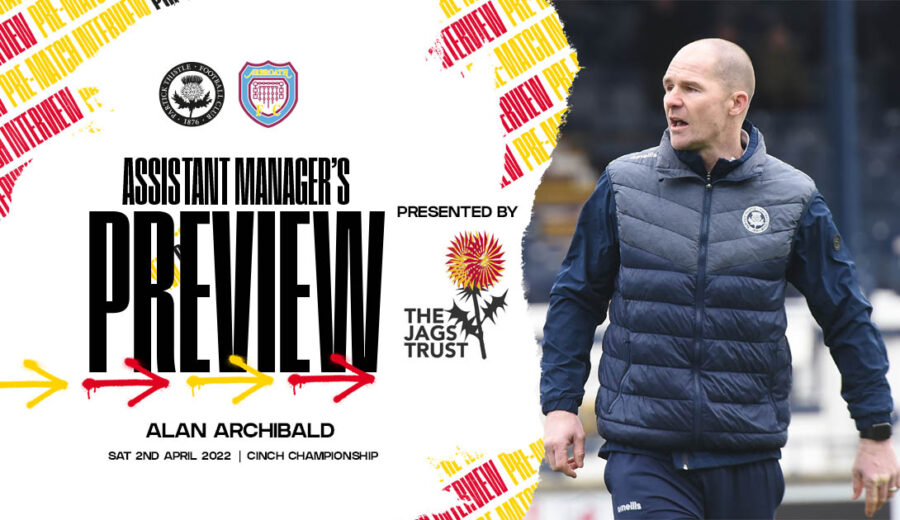 With five games left of the regular cinch Championship season, Partick Thistle are hoping to consolidate their position in the play-off places as Arbroath visit Firhill this weekend. The Jags are on a four-game losing run but still maintain fourth position, two points above Raith Rovers and 10 points behind this Saturday’s opponents who occupy second place. Last time the sides met a Ciaran McKenna strike on the hour mark cancelled out an early Colin Hamilton goal as the points were shared. Thistle assistant manager Alan Archibald spoke to ptfc.co.uk ahead of the fixture:

“We can’t hide away from the fact that we’ve been on a poor run over the last few weeks and it’s come at the worst possible time so we have to try to get back on track with a result this week. I think the boys know they’ve left themselves with work to do and they want to get out there against Arbroath to try to get us going in the right direction again.”

Although the Jags suffered a 2-1 defeat in their most recent game against Kilmarnock, Archie felt there were some positives to take from the game.

“Look, we didn’t get any points which is what we need at the moment but performance-wise we did feel it was a step up from the previous couple of games. We started the game positively and had a bit of control in the midfield but then we gave away a silly foul from a long punt and Kyle Lafferty produces a brilliant free-kick which is obviously a setback.

“We then get into half-time and want to put them under pressure in the second half but instead we got out and concede in something like 20 seconds and there are no excuses for that – it was such an avoidable goal to lose.

“That made things very difficult for us because Kilmarnock are a solid defensive team but, that being said, I think if we’d got our goal a bit earlier then it would have been interesting. Even with that, we didn’t deserve to win and we need to improve on that if we want to get something against Arbroath.”

Despite a disappointing run of recent results, with the team still sat in the play-off places, Archie says the team need to remember that there’s still a lot to play for.

“We’ve tried our best to relay that to the players this week. When you lose a few in a row it can feel like the world is ending but it’s still in our hands to go and finish in the play-offs. Obviously, there needs to be that improvement that I’ve mentioned but we’ve shown earlier in the season that we’re capable of competing with anyone in the league so hopefully we can get back to that.”

If Thistle are going to get back to winning ways this weekend then they’ll need to inflict just a fifth defeat of the league season on Dick Campbell’s Arbroath and Alan says the squad know exactly how hard that task will be to complete.

“We’ve played Arbroath three times this season so we know what to expect at this point and that is a team with a bit of everything. They’re strong, experienced and stubborn defensively but they’ve also got plenty of attacking talent and ability in the team.

“They’ve maybe not been as consistent over the last couple of months but they’ve still only lost three or four games all season so we’re under no illusions about how difficult it will be to get all three points.”

Over the past couple of weeks a variety of absences have left Thistle short of numbers in the matchday squad and, although there are still some problems with injury and illness, Archibald is expecting a couple of players back.

“The first one is Lewis Mayo who was away on international duty. He’ll come straight back into the squad as well as Robbie Crawford who was ill. Robbie’s has been back in training so we’re pleased to have both of them available again.”