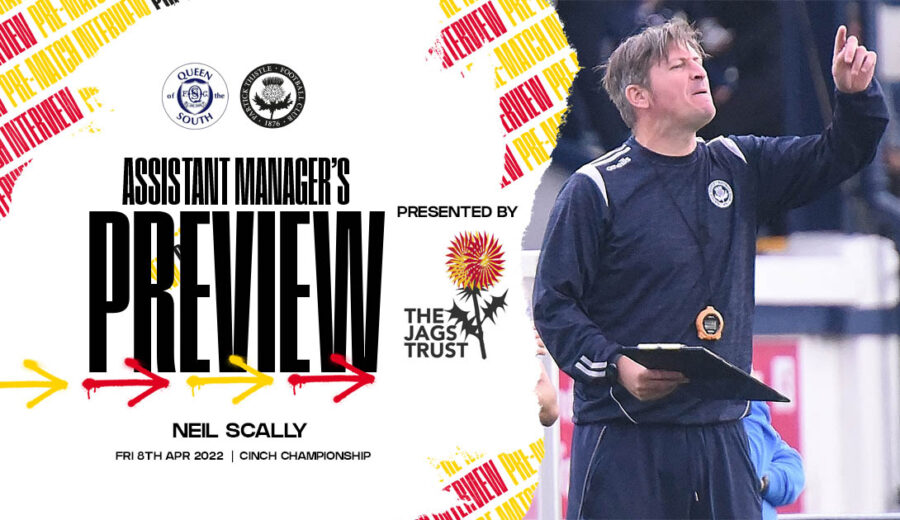 Partick Thistle will be looking to strengthen their hold on fourth place in the cinch Championship as they travel to Dumfries to take on Queen of the South. Another featured Friday night game, the Jags will be looking to get the better of the Doonhamers as they did early last month when a late Kevin Holt penalty settled things at Firhill. It won’t be easy though with Queens desperate for points as they look to avoid automatic relegation to League One. Thistle assistant manager Neil Scally spoke to ptfc.co.uk ahead of the fixture:

“It’s a game to look forward to for us. Over the past month or so we’ve had a lot of injuries and illnesses but we’re starting to see guys coming back and that’s great to see for us as a management team but also for the other players as well.

“We’re hoping that we can now put those four defeats behind us now and focus on the games we’ve got left, all of which will be massively important as we look to get into the play-offs.”

The Jags drew with Arbroath at home on Saturday as they ended their run of losses and Neil felt there were plenty of positives to take from the game against the Red Lichties.

“It was a difficult game against a very good team but I thought we did well. There wasn’t much in the first half but coming out after half-time we created a few decent chances and on another day maybe we take one of them.

“We were delighted to get the clean sheet though because we’d been defending uncharacteristically in the four games before Arbroath but it was much more like it on Saturday. We did the basics well and cut out the silly mistakes. Now it’s up to the boys to build on that and take it up another notch for Friday.”

Brian Graham and Lewis Mayo both returned to the team at the weekend having missed out previously due to illness and international duty respectively and Scally felt they were both important parts of the improved performance.

“Brian had only trained once or twice in a number of weeks so it’s fair to say he was nowhere near 100% but he was desperate to play and help the team. His illness was still affecting him a bit but he was pressing as much as possible and he found space for a few chances including one which needed a great save to stop.

“As for Lewis, we moved him into midfield and we felt he was one of the best players on the park. We knew we were going to need to match them physically and he did a great job of that just in front of the defence, helping deal with high ball and putting tackles in when he needed to.”

Now, as the team prepare to head to Dumfries, Neil is expecting a tight game against a team who are fighting for their lives at the bottom of the table.

“We’ve played Queens four times already this season and they’ve never been easy games so we expect it to be similar this week especially when there is so much on the line for both teams.

“For us, we need to focus on ourselves. We’re more than capable of going away from home, being tough to break down and scoring goals but we’ve not shown that recently so it’s about getting back to that.”

Finally, Scally gave us the latest team news ahead of our Friday night fixture.

“Well, as I said earlier, we’re seeing more guys back in training which is fantastic. Ross Docherty, who missed the Arbroath game, has been back in as has Alex Jakubiak although he’s only had one day of training. Darren Brownlie has been doing more significant training with the squad though he’s still steadily building up his workload.

“On top of that it’s also been another week of training for guys like Brian Graham and Robbie Crawford who missed some time last month and that will be extremely valuable for them. Fingers crossed we’re on our way out of the other side of this spell of injuries and illnesses now.”

There will be no livestream provided by Queen of the South for this Friday’s game at Palmerston Park. The game is, however, being broadcast live on BBC Scotland with coverage starting at 7:30pm, 15 minutes before kick-off.