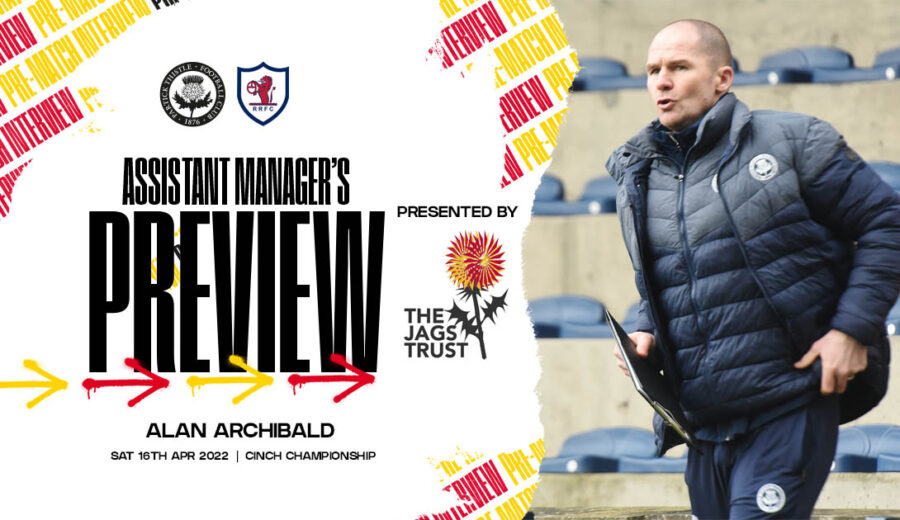 Firhill Stadium plays host to a huge game this weekend in the cinch Championship as Partick Thistle look to book their place in this season’s promotion play-offs against Raith Rovers who sit one place and six points behind the Jags with three games to play. Thistle know a win against John McGlynn’s side would guarantee a top four finish and even a draw would pretty much do the job due to the goal difference gap between the two teams. Jags assistant manager Alan Archibald spoke to ptfc.co.uk to preview to clash:

“This is obviously a very big game in the context of our season. Our goal at the start of the season was to make it into the promotion play-offs and now we’re one result away from doing that. It won’t be easy though because Raith know they really need to come here and win to keep their hopes alive for the play-offs.”

The Maryhill men returned to winning ways last Friday night against Queen of the South and Archie gave us his assessment of that victory.

“It wasn’t our best performance by any means. Queen of the South came at us and created some good chances but we were able to survive that and hit them on the counter attack which was great. We needed Jamie Sneddon a couple of times and had to rely on them missing chances too which isn’t ideal but at the end of the day we got the points which is the most important thing.

“The players know that we’ll have to be a lot better than that to get a result this weekend and with another week of training for the guys who have missed time hopefully we’ll step it up on Saturday.”

Preparing to take on Raith Rovers, Alan is expecting a tough game against this season’s SPFL Trust Trophy winners.

“We’ve seen first hand in our games against them that they’re a good team. They probably shaded things in our most recent game against them but last time at Firhill we thoroughly deserved our win so I think both teams will believe they can win the game.

“They’ve had this long run where they’ve struggled for wins but there have been some games in there that they’ll feel they could have had more from like when they were 3-1 up on Arbroath so the quality is definitely still there and we’ll have to be at it to get a victory.”

Knowing that a win would secure a spot in the play-offs, Archibald says the team are keen to get it done and dusted at the earliest possible juncture.

“Of course you want to finish it off as soon as you can. Especially because we’re against the team directly behind us – if they get a win then the momentum is with them so we want to go out there and get the job done on Saturday. As I’ve said, it won’t be easy but hopefully the win last week gives us a platform to go and win from again.”

Finally, Archie gave us the latest team news as the Thistle squad continues its return to fitness.

“It’s been great to see boys back over the last few weeks. Getting Brian Graham back has been a huge boost and then Ross Docherty and Robbie Crawford have returned after missing games so that’s been good.

“Also, Alex Jakubiak got 45 minutes at Queen of the South and came through that alright. We feel he’s got a lot to offer to the team so it’s pleasing to see him back too.

“Kyle McAllister is another one who is now back in training. He had a minor surgery a few weeks ago but was back in with the boys from Monday this week and has looked really sharp actually so the options we have on the bench now compared to three weeks ago are night and day and it should only help our cause.”

Exclusive video interviews with Lewis Mayo and Thistle assistant manager Alan Archibald will be available for JagZone subscribers to watch today – log in to view.