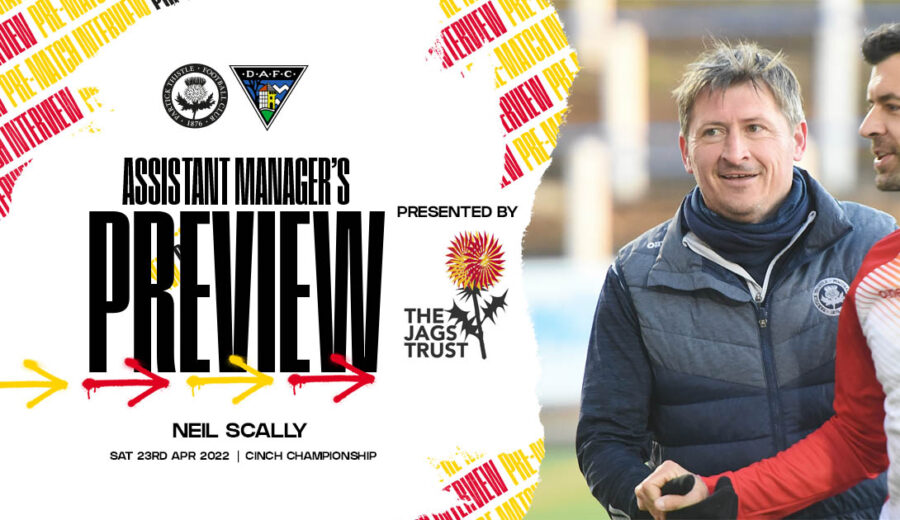 Dunfermline Athletic are the visitors to Maryhill tomorrow afternoon as Thistle look for the three points that will almost secure their promotion play-off space. The Pars have ideas of their own for the points and head to Glasgow looking to put space between them and the relegation slots. Assistant Manager, Neil Scally, spoke to ptfc.co.uk ahead of the game.

“We know going into the weekend that Dunfermline will be a tough game. John Hughes has them playing well and we know that they’ve hit a bit of form recently. On top of that they are fighting to avoid finishing in those bottom two spots so we’re expecting it to be a difficult match.

“Obviously the last time we played Dunfermline we really weren’t good enough and that result really hurt especially after we go in front we should really look to build on that and put the pressure on them but they get back into the game with an unfortunate own goal and then they use that momentum to go on and win the game so we will be looking to put that result right this weekend when they visit Firhill.”

A last gasp defeat at the hands of Raith Rovers has kept the playoff race alive but Neil knows Thistle hold their destiny in their hands.

“We know that securing a playoff spot is in our hands. Unfortunately, we weren’t able to do that last week, which is obviously a disappointment, but we know that if we play well and put on a performance on Saturday we can take a big step towards finishing in those playoff positions.

“We had chances to secure our place last weekend and we probably should have taken them and then they obviously go up the other end and grab the winner so the result against Raith obviously stung but we can’t dwell on that as we have two massive games coming up that will define our season.”

With a full week of training between games, Scally reports it is an upbeat camp at Firhill who are looking forward to our last two regular season games.

Finally, Neil provided us with the latest team news.

“The squad of players we have available for Saturday’s game is much the same as last weekend so it’s good have the core group of players back together and training regularly again and that can only stand us in good stead as we head into the final two games of the season.

“Obviously, we had a couple of weeks where we were missing some players and that really hampered us in terms of the depth of the squad but with those guys back training and back in for contention it will really boost us for these final two matches.”

Exclusive video interviews with Stuart Bannigan and Thistle assistant manager Neil Scally will be available for JagZone subscribers to watch today – log in to view.

JagZone subscribers will be able to tune in to live audio commentary for our clash with Dunfermline, starting at 2:30pm – click here to tune in.