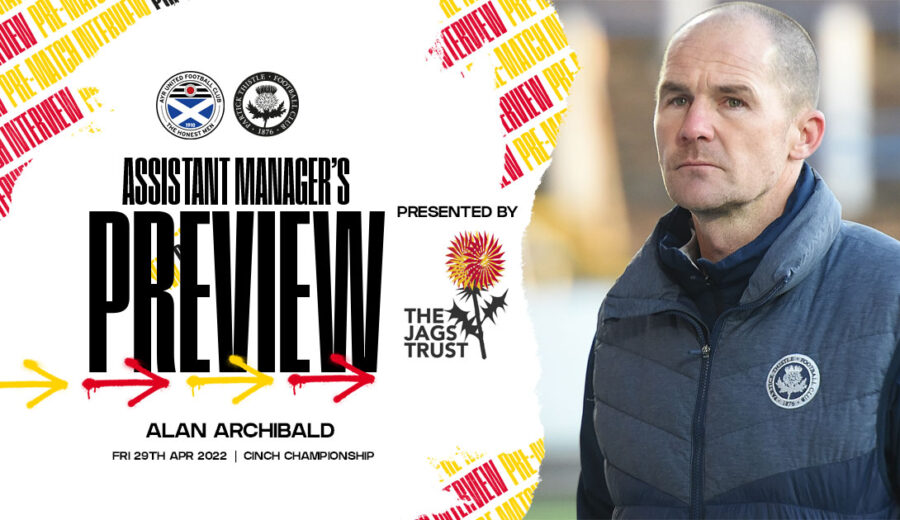 The regular cinch Championship season concludes with this Friday night’s slate of games as Partick Thistle travel to Somerset Park to take on Ayr United, hoping to confirm their spot in the promotion play-offs. If Ian McCall’s side can avoid defeat then fourth place will be theirs while the Honest Man have to match or better Dunfermline’s results to ensure they don’t fall into the relegation play-off spot. Jags assistant manager Alan Archibald spoke to ptfc.co.uk ahead of the trip to Ayrshire:

“We’ve prepared well this week and everyone has been feeling good after the win against Dunfermline. Losing the Raith game was hard to take because we felt we deserved a draw at least but the boys did exactly what they had to by responding with a win.

“Now we go to Ayr in a great position to secure a play-off place which was our goal at the start of the season. We’re not taking it for granted though, we’ve got to presume Raith are going to win their game and do the business in ours.”

Looking back more closely at the victory against Dunfermline, Archie felt there were plenty of positives to take from the game.

“Of course, getting the three points was the most important thing but I think there were aspects of the performance that we were pleased with as well. We started the game strongly and got in front after 15 minutes which was key having lost the week before. We also created a couple of other good chances which could have had us further ahead.

“Then, in the second half when they were pushing for an equaliser and putting four or five players up front we stood up to it well and made sure Jamie had little to nothing to do. That’s now three clean sheets in four games so we’re getting back to what we’ve come to expect from the guys at the back.”

Now, Alan is hoping to carry those positives into another game against a team who are desperate for points as they look to avoid second bottom.

“I’d expect them to be quite open to be honest. They might need to win the game depending on what Dunfermline do against Queen of the South so they can’t really risk sitting in for a draw when the circumstances could change during the match.

“They gave us a really tough game the last time we played them, back in February I think it was, so we know they’ll not make it easy. From our perspective though we want to go and win the game and then carry that momentum into the play-offs.”

Archie finished by giving us the latest team news ahead of the game at Somerset Park.

“We do have a couple of concerns with Scott Tiffoney and Brian Graham. Tiff passed a late fitness test to play last week but didn’t look his usual self in the first half because of what’s been bothering him so he’ll probably miss this week’s game.

“As for Brian, he’s been carrying a knock for a little while and put in great effort to play through that but it might keep him out for the Ayr game.

“They’re obviously big misses for us but the last time they were both out we had five or six others out at the same time. That’s not the case this time – it’s pretty much a full squad apart from those two so we have more options in terms of replacements.”

Exclusive video interviews with Alex Jakubiak and Thistle assistant manager Alan Archibald will be available for JagZone subscribers to watch today – log in to view.

Our hosts, Ayr United, will be livestreaming Friday night’s game with PPV passes available for £18 – click here to buy yours.