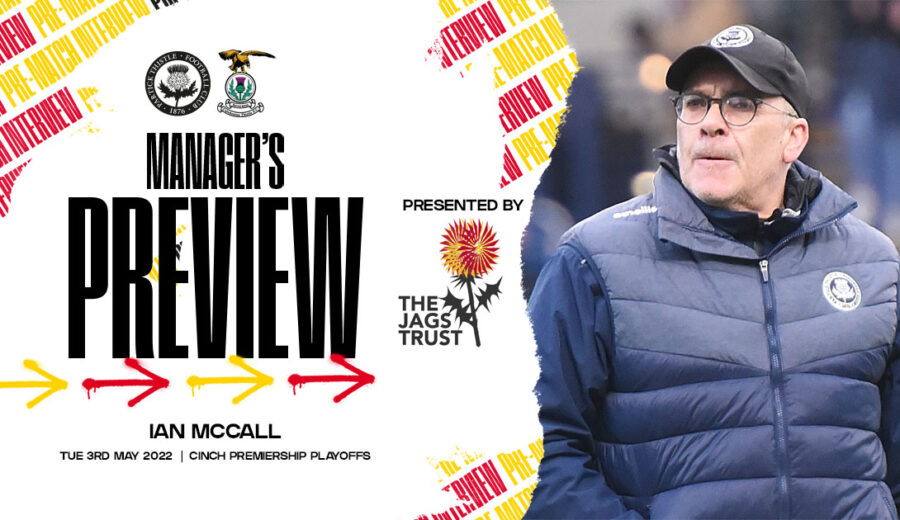 All supporters are reminded that this evening’s game kicks off at 7:05pm.

The cinch Premiership promotion play-offs begin this midweek as Partick Thistle host Inverness at Firhill in the first leg of the quarter-finals. The two sides last met back in March when a Kevin Holt strike won the game late on though the Caley Jags have finished the regular season in good form, winning six of their last eight. Thistle boss Ian McCall spoke to ptfc.co.uk to preview the tie:

“It’s what we’ve been working towards all season. The last few months haven’t been straightforward for us but we’ve managed to achieve the goal we had last summer so now we have to go in and give it everything we’ve got.”

The manager wasn’t at Somerset Park on Friday night as we closed out the cinch Championship season due to illness but he gave us his assessment of the game a few days on.

“We made a few changes to give certain players a rest after playing a lot of football but then we had a couple of first half injuries for Kyle McAllister and Kyle Turner and Lewis Mayo took ill at half-time so the plans were forced to change really. Then late on Ross Docherty picked up a knock which forced him off too.

“Even still, the performance was disappointing. It was a huge game for Ayr and they deserved to win it but come Tuesday the team will have a few changes and we’ll be looking to put on a much better performance.”

McCall gave us an update on the four players who were forced off at Somerset Park as well as Brian Graham and Scott Tiffoney, neither of whom made the matchday squad against the Honest Men.

“Ross Docherty is fine, his was just a precaution. Lewis Mayo should be alright as well. The likelihood is that Turner and McAllister will miss the first leg though we hope they might be back for Friday.

“As for Brian and Tiff, they should be fine. Tiffoney has been looking the best he’s been for a wee while over the past couple of days. He possibly could have played at Ayr but we felt he really needed that extra bit of recovery and based on what I’ve seen in training, it’s served him well.”

Thistle and Inverness are no strangers having met four times already this season and the gaffer says he’s anticipating a tight contest as it tends to be against the Highlanders.

“We know they’re a really good team and, thinking back on the season, when we drew 0-0 with them here that was probably the best opposition performance we’ve come up against.

“We’ve spoken to the players about how we think they’ll set up but we also want to focus on ourselves, our formation and make sure we can influence the game the way we want to. Obviously, this situation is a bit different to a typical game because it’s over two legs so we want something positive to take up to Inverness.”

With the first leg being at home, Ian is hoping that a sizeable Thistle support make their way to Firhill to back the team as they look to kick-off their play-off campaign in winning fashion.

“The crowd has been great for the last few home games so hopefully we get that same backing on Tuesday night. It’s a big game in midweek so ideally we want to create a great atmosphere because it can make a real difference. It’s not been easy at times during the second half of the season but we’ve now got a huge chance to go and finish the season on a high but we’ll need the fans’ backing to do it.”

Exclusive video interviews with Stuart Bannigan and Thistle manager Ian McCall will be available for JagZone subscribers to watch today – log in to view.

JagZone subscribers will be able to tune in to live audio commentary for our clash with Inverness, starting at 6:35pm – click here to tune in.

We will be providing a pay-per-view option, priced at £12, for any supporter who wishes to watch their livestream of the match – click here to purchase.