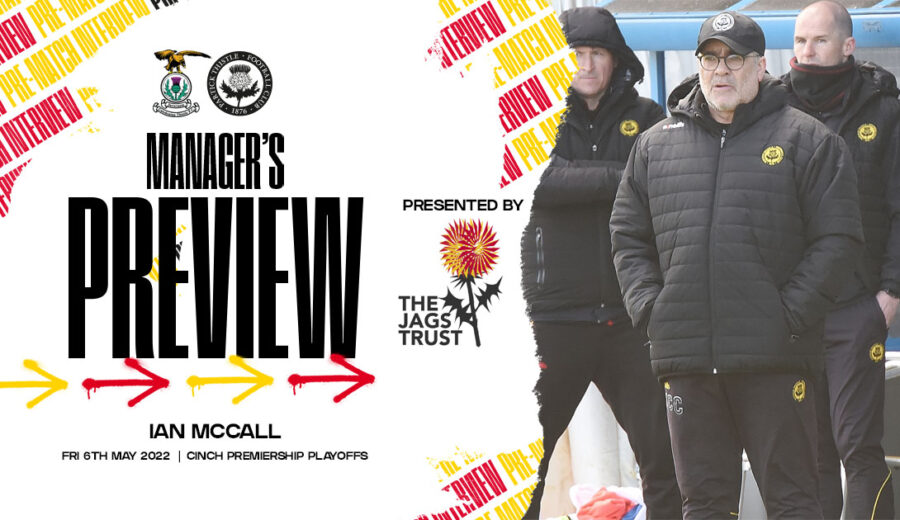 Following defeat in the first leg, Partick Thistle head to Inverness this Friday night looking to turn their cinch Premiership play-off quarter-final on its head. The Caley Jags came from a goal down to win on the night at Firhill on Tuesday and now it’s the Maryhill men who must overturn a one-goal deficit as they travel to the Highlands. Jags boss Ian McCall spoke to ptfc.co.uk ahead of the clash:

“It’s half-time in the tie so it’s still all to play for in the second leg – there’s only one goal in it so we still believe. If you think about it as a one-off game where we have to go and win to keep it alive, we completely believe we’re capable of going there and getting that result.

“The last time we went up there, it was one of our best attacking performances since Christmas and, a bit like Tuesday, there were a few poor defensive moments at key points which cost us the result. We know we’ve got that type of attacking performance in us though so hopefully we see that for this huge game.”

Having had time to reflect on the first leg loss to the Caley Jags, McCall said his view of the game had changed ever so slightly in retrospect.

“I’ve had time to think back on things and I spoke to Billy Dodds after the game and, honestly, a draw probably would have been the fairest result. After the game I said I thought we shaded it but Inverness had their chances too and will have felt they didn’t deserve to lose but it was just frustrating from our point of view that we concede two avoidable goals and miss a big chance all in the last 20 minutes which make things more difficult for us in the second leg.”

Although the result was disappointing, the gaffer doesn’t feel the defeat at Firhill has dented the belief of his squad as they prepare for a big 90 minutes, and possibly more, at the Caledonian Stadium.

“The guys know themselves that there wasn’t much in it on Tuesday. This squad has always been one that believes in itself and we’ll need that going up to Inverness. The players know we need to win but they also know Caley are only a goal ahead so it doesn’t have to be all guns blazing from the first whistle.

“We’ve given them a pretty light workload over the past couple of day of training so we’re looking for plenty of energy in the game. We’ve got 90 minutes to go and get the goal we need but a good start would be massive for us.”

In terms of injury news, the manager gave us the latest on Kyle McAllister, Kyle Turner and Lewis Mayo who all missed the first leg.

“Kyle McAllister won’t make it in time unfortunately but we expect Kyle Turner to be in the squad. As for Lewis Mayo, he’s a maybe at this point so we’ll have to wait and see.”

Exclusive video interviews with Ciaran McKenna and Thistle manager Ian McCall will be available for JagZone subscribers to watch today – log in to view.

JagZone subscribers will be able to tune in to live audio commentary for our clash with Inverness, starting at 7:15pm – click here to tune in.

The game at the Caledonian Stadium will be broadcast live on the BBC Scotland channel.