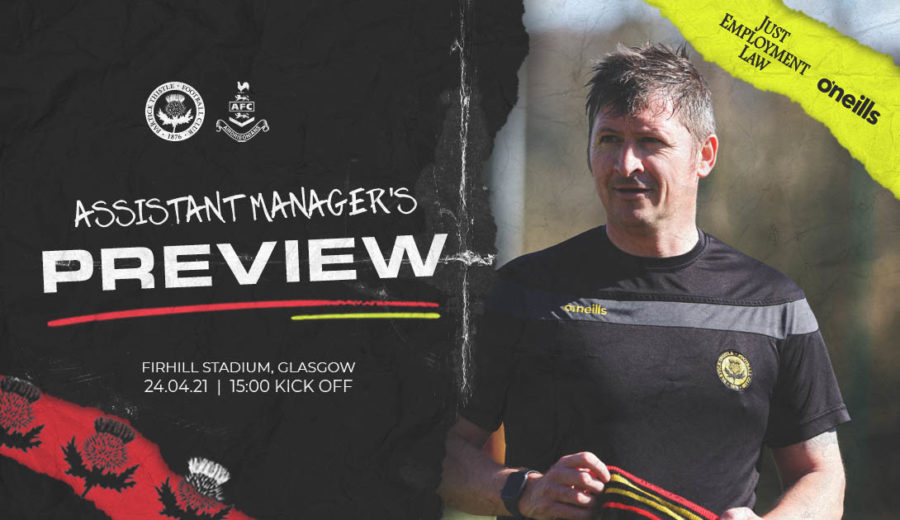 The post-split fixtures begin with the visit of Airdrieonians to Maryhill as Thistle look to get off to a strong start ahead of the run in. Thistle added another three points to their tally courtesy of a 2-0 victory against Dumbarton last Tuesday night. Thistle assistant manager Neil Scally spoke to ptfc.co.uk following a sunny Friday training session.

“The mood around the camp has been good because of the recent results and the run that we are on currently, it always helps when it is good weather to train in as but we’ve been really focused ahead of the game at the weekend. We’ve spent the last couple of days working hard ahead of a tough match on Saturday. Airdrie are one of the form teams in the league and will arrive at Firhill with a lot of confidence, but we’ve got confidence as well from our recent run.”

Tuesday’s nights match against Dumbarton saw Thistle strike late to seal all three points after a contentious decision earlier in the second half.

“The moment galvanised the team a lot as it looked over the line and we thought it was going to be given, but I felt that a goal was coming for us as we had a lot of control in the match and had started to hem Dumbarton in for a little while before then. We went on, got the two goals and secured a vital three points.

“The players are full of confidence, we’ve been scoring goals and there has been that consistency in selection that has helped the team. You can see the impact finding the back of the net has had on the squad and it was great to see Ross MacIver getting his first goal for the club. We’ve always said since we came back in March that it was going to be a squad game and everyone would be involved and it’s good to see different players contributing in different ways over the last month or so.”

With every club reaching 18 games, the league has extended to 22 matches and Neil believes it is a credit to every club in the division that the programme was completed as scheduled.

“I think the fact that everyone has played the number of games they have in such a short space of time is testament to the league but also to all the players from every club who have went onto the pitch and done it. We know ourselves what we’ve had to do with a busy schedule, testing requirements and adapting schedules to make sure we are ready to go for matches and I’m sure everyone else has been very similar.

“We need to re-group and start again though. There is another busy schedule ahead and we need to give everything we have through that. Our full focus is on Saturday afternoon and the game against Airdrie at Firhill.”

We’ve had two close encounters with the Diamonds already this season and the Jags assistant manager knows exactly how tough an afternoon it will be.

“Airdrie are a good team, we’ve seen that first hand. The meetings between the sides have been end to end with plenty of opportunities for both sides. They were very good against us when we played them a few weeks ago before we managed to react well to turn the game back in our favour. We know how difficult it will be and all the teams are incredibly close in the top five so every three points will be crucial, starting on Saturday.”

Finally, Neil updated us on the team news ahead of Airdrie’s visit to Maryhill tomorrow.

“We’ve got more or less the same squad to pick from tomorrow as we did at Dumbarton on Tuesday night. Tam O’Ware is the only one who hasn’t been involved in training over the last few days. We’re all raring to go on Saturday and hopefully keep the good run going.”

More exclusive preview interviews with Ciaran McKenna and Neil Scally will be available for JagZone subscribers to watch today – log in to view.

JagZone subscribers will be able to tune in to live audio commentary for our clash with Airdrieonians – click here to tune in.