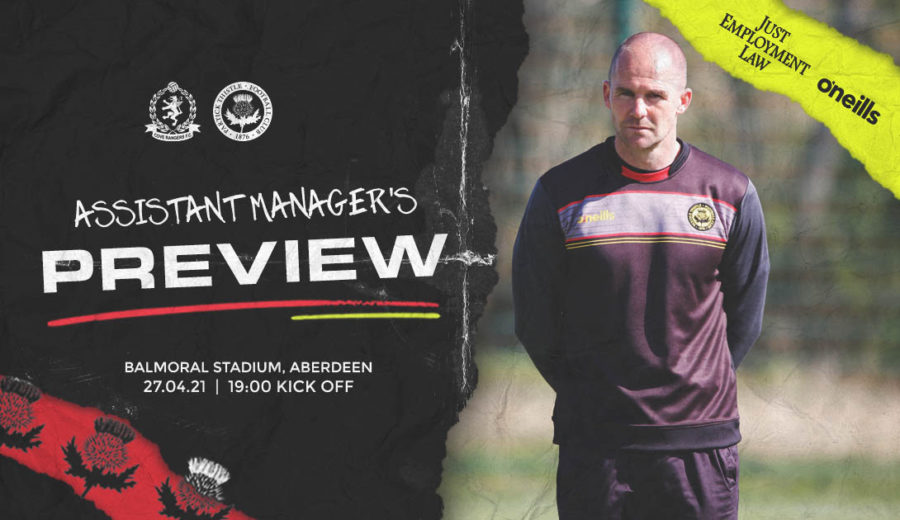 Partick Thistle travel north to face Cove Rangers this midweek as they contest their second post-split game of the League One season. Each side began their top five fixtures at the weekend with Brian Graham’s goal giving the Jags three points against Airdrieonians while Cove were denied a big win away at Falkirk by a late Conor Sammon strike. The two teams have already met twice this term with the Wee Rangers beating the Maryhill men at Balmoral back in October before the spoils were shared at Firhill last month. Thistle assistant manager Alan Archibald spoke to ptfc.co.uk ahead of the clash:

“We’re looking forward to every game at the moment because of the form we’re in. The guys are really confident and we’ve played some nice football recently so although we know it will be very tough, we’re well-equipped to go and get ourselves a result.”

Thistle’s win over Airdrieonians was the first of their current run of victories to be decided by a single goal and Alan was pleased with the grit the team showed to see out the game.

“It was a bit of a strange game with the way it panned out. We were really happy with the way we started because we had energy and pace and really took the game to them which they were struggling to deal with but because we only scored the one goal, it kept the game alive.

“In the second half it was a completely different game and they put us under more pressure, particularly in the last 15 minutes or so. You know they carry that threat from set plays and they’ll cause every team in the top half problems with those corners and long throws.

“Right at the end they were throwing everything at us and it did get a little bit nervy especially when they hit the post but for the most part I thought we stood up well to them and showed good character to stick it out for the win.”

Both Thistle-Cove contests so far this season have had mitigating circumstances with the game at Balmoral affected by the wildly windy weather and the Firhill meeting tempered by a lack of match sharpness as the sides returned from a two-and-a-half-month lay-off. For this reason, Alan doesn’t believe the Jags have really shown Cove their best selves this term, something that they’ll be keen to put right this time around.

“It was barely a game of football last time we went up there due to the really high winds, it was ridiculous. Both teams really struggled to create much and it was a game of few chances which meant neither side could show what they are capable of.

“When we played them at Firhill it was the first game of the re-start so there was certainly a lot of rust which meant there were a few missed chances and some misplaced passes. It was a frustrating one because we did get ahead through Joe Cardle but we didn’t put the game to bed and that allowed them back into it and score their equaliser.

“Hopefully this time we show what we’re really about against them because we definitely haven’t done that in those two games, and Cove will be thinking exactly the same, but we really want the points at this stage of the season.”

Stuart Bannigan and Ross Docherty are both nursing injuries at the moment that mean they could miss the game but Archibald gave us the latest update on the midfield duo.

“They’re both 50/50 at the moment. It shows you the type of player Doc is that he played through that injury on Saturday for about 20 minutes. It was a nasty knock that he picked up but we’ll give him every chance to make it because he’s such a key part of this team.

“The same goes for Stuart. It’s an issue that he started feeling during the Montrose game and then played through against Dumbarton which he’s now trying to get over. We’re hoping that both of them are able to play but we’ll need to wait and see. James Penrice returns from suspension so he’ll be back into the matchday squad.”

More exclusive preview interviews with Alan Archibald and Darren Brownlie are available for JagZone subscribers to watch now – log in to view.

JagZone subscribers will be able to tune in to live audio commentary for our fixture against Cove Rangers – click here to tune in.

The home side are offering a PPV option, priced at £10, for Jags fans who wish to watch a livestream of the game – click here for more info.

We’ll have extended highlights and a full game replay of our trip to face Cove Rangers on JagZone.