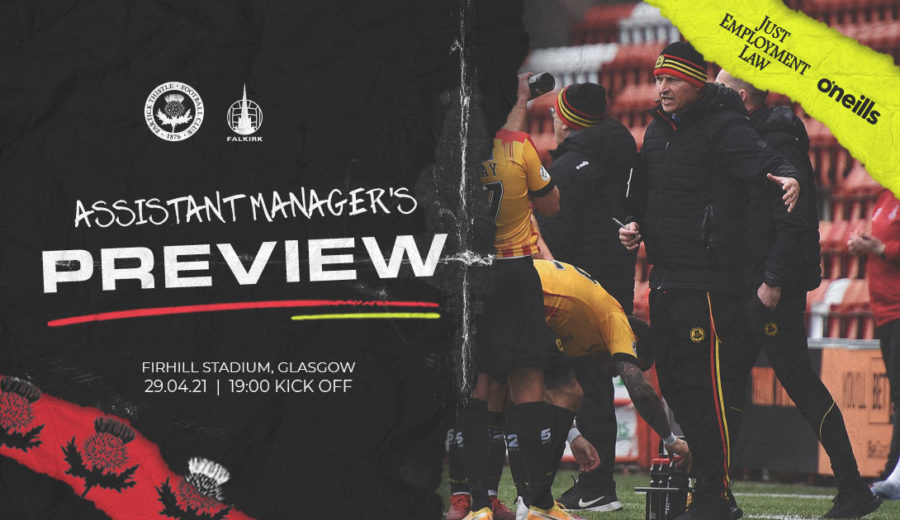 Just two days after travelling up to Aberdeenshire to face Cove Rangers at Balmoral, Partick Thistle take on Falkirk in their penultimate game of the League One season. The Jags earned a point against Paul Hartley’s side on Tuesday with Scott Tiffoney striking in the 77th minute to secure the draw. Now, they face the Bairns for the third time this season in a big match at the top of the table. Jags assistant manager Neil Scally spoke to ptfc.co.uk ahead of the game:

“We had sort of mixed feelings after the game on Tuesday. We know how difficult it is to take points from Cove up there so we were pleased with the draw in that sense but at the same time we went to win and had chances to win it late on so we weren’t completely satisfied.

“At the same time, we were really pleased with how the boys came back because going a goal behind with 15 minutes left, you fear the worst but it showed great character to get that goal straight away before they were able to get settled defensively.”

There were jubilant scenes on the touchline as Scott Tiffoney’s goal went in at Balmoral and Scally says that togetherness is an important part of any good team.

“It’s something that the manager tries to bring to his squads. He brings in good people who gel together and create that feeling of everyone being in it together.

“I think you’ve seen with celebrations for a few goals as of late just how much everyone wants this. It’s been something we’ve been working towards all season and at times things haven’t been going our way but we’re in a good position now and we’re hopeful we can finish the job.”

With such little time between fixtures, Neil says different players have prepared for tonight’s game in different ways.

“What the players have done since the Cove game depends on how much you’ve been playing recently really. There are a group of guys who have been at Firhill recovering with massages, bike work and that sort of thing then there are some players who’ve had some minutes but not as many as others who’ll have done an extended warm-up and some stretching, nothing too intense.

“There’s was also a separate session for those who haven’t played as much where they essentially did a normal day-before-the-game session so it’s definitely a bit different with the squad sort of split up into groups based on where they’re at.”

Although the recent schedule has been tough for the players, Scally reckons the magnitude of tonight’s game should energise the team.

“It’s been very busy these past few weeks and every game has been massively important so we’ve been giving our all in each match. Looking at that Cove game it was a long trip up, a very intense game and then a long trip back so it’s a tough one to then have to play another game a couple of days later but it’s a massive game, every player knows the importance of the match so hopefully that adrenaline pushes them through any tiredness they might be feeling.”

An exclusive preview interview with Neil Scally will be available for JagZone subscribers to watch today – log in to view.

JagZone subscribers will be able to tune in to live audio commentary for our clash with Falkirk – click here to tune in.