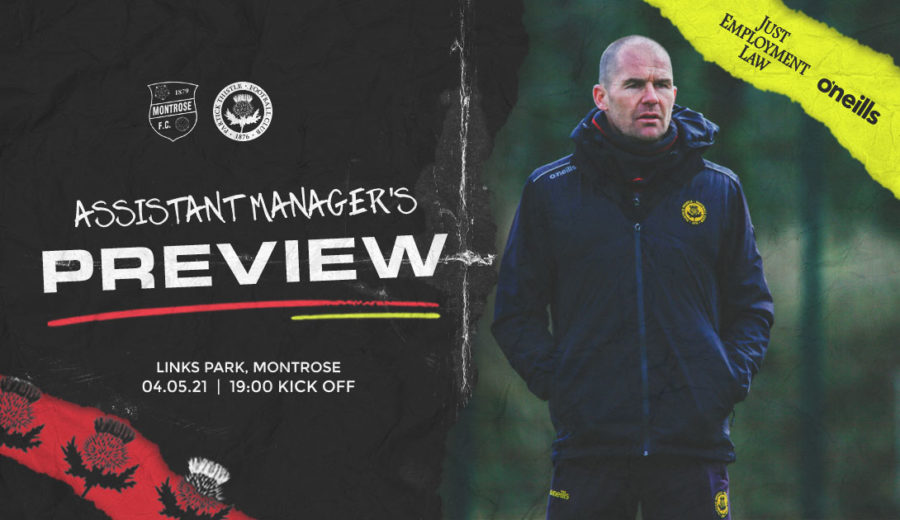 Thistle fans are reminded that tonight’s game will kick off at 7pm.

Partick Thistle wrapped up the League One title this past Thursday as they beat Falkirk 5-0 at Firhill in their second-to-last game of the season. Now, they travel to Links Park to face Montrose in the final game of the season, hoping to extend their 12-game unbeaten run-in league action. Although the Jags don’t need a result, the home side still have the opportunity to finish in the play-offs and Thistle assistant manager Alan Archibald spoke to ptfc.co.uk ahead of the contest:

“Everyone at the club has enjoyed themselves since Thursday and it’s been much deserved. It’s been a really tough season for everybody with everything that’s gone on but it was great to see the players and the fans celebrating after we got the job done.

“I don’t think we were many people’s pick to win the league seven or eight games ago and it’s a huge credit to the players that we’ve been able to turn things around so quickly and put together the run that we have.”

Archie paid tribute to a few members of the Jags squad who have been playing with knocks recently and told us that they’ll likely miss the trip to Links Park.

“There are a group of guys who’ve pushed through these past few games because of what’s at stake and they shouldn’t really have played so now that we’ve won the title these guys will maybe sit out the last game.

“Stuart Bannigan, Darren Brownlie, Brian Graham and Ross Docherty are all guys who wouldn’t have played on Thursday had it not been such an important match and Jordan will have a look at them ahead of the game to see what part they’ll play but for example Ross Docherty got that shoulder knock against Airdrieonians, went to A&E on the Saturday night and then put in two more great performances within days so that’s the sort of sacrifice we’re talking about.”

Thistle haven’t lost a league game since returning from the break in March and Alan says everyone is keen to keep that run going against the Gable Endies.

“It’s something that we’re very proud of and something we want to take to the very end of the season. Especially these last two or three weeks, we’ve conceded very few goals and found our rhythm with scoring so you just want that to continue for as long as possible.”

Stewart Petrie’s side could yet find themselves in the promotion play-off positions going into the final day which Archibald says means the Maryhill men have to treat the game as they would any other.

“We have to take it seriously because that’s what we’d want if the shoe was on the other foot. As I’ve mentioned, there will probably be guys who miss out but we’ll put out the strongest team possible to go and try to win the match.

“The fact that some players won’t make it means there will be chances for guys who’ve maybe not had as many minutes lately or younger guys too and you can’t underestimate the hunger and desire those guys should provide.”

An exclusive preview interview with Alan Archibald are available for JagZone subscribers to watch now – log in to view.

JagZone subscribers will be able to tune in to live audio commentary for our fixture against Montrose – click here to tune in.

The home side are offering a PPV option, priced at £XX, for Jags fans who wish to watch a livestream of the game – click here for more info.

We’ll have extended highlights and a full game replay of our trip to face Montrose on JagZone.