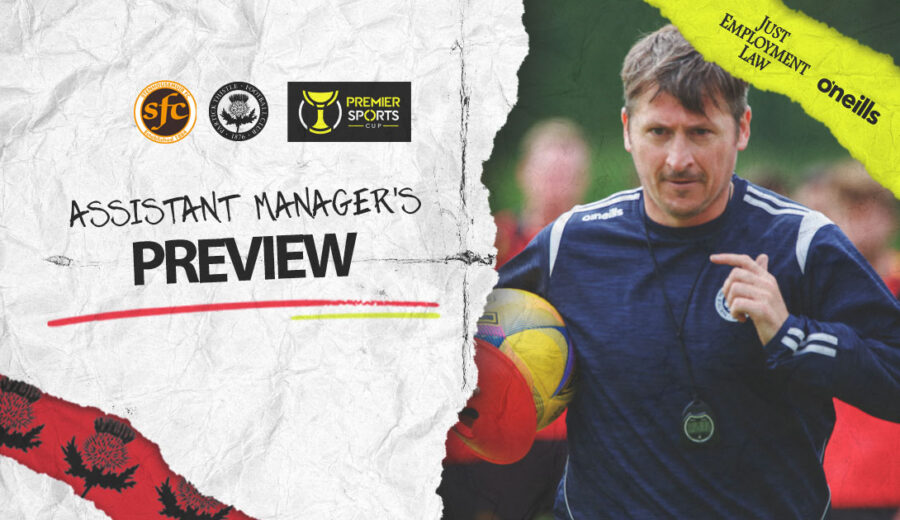 Partick Thistle look to get their Premier Sports Cup campaign back on track this weekend as they take on Stenhousemuir at Ochilview in their second group stage game. The Jags suffered opening day defeat at the hands of Dunfermline last Saturday and will now likely need three wins from three to have a chance of progression. However, they come up against a Warriors side who have already caused an upset this week by beating League One side Dumbarton away from home. Thistle assistant manager Neil Scally spoke to ptfc.co.uk ahead of the game:

“It was a difficult one to take on Saturday because we were all looking forward to the game obviously but we now have to prepare for another match.

“There were parts of the game that we were pretty happy with and when you look at the start of the game in particular, we were well on top and could have maybe scored more than just the one but we didn’t and that kept them in the game.

“From our perspective, the goals we lost were all disappointing and as a unit we need to defend better, without a doubt. That’s something that we’ll work on but we know ourselves that we’re better than what we showed defensively against Dunfermline.”

Brian Graham netted the opener for the Jags and then in the second half Zak Rudden came off the bench to get his scoring started for the season which Neil Scally said was very pleasing as the management team have high hopes for the forward this season.

“Zak knows what our hopes are for him. We think he’s got the ability to go out and be one of the best attackers in the league so we were delighted that he got his goal at the weekend. He missed some time in pre-season and didn’t get the chance to play any friendlies which is why he didn’t start but getting on the pitch to get those match minutes will do him good.”

Thistle face Stenhousemuir next and although they’re the lowest ranked team in the group, Scally says they won’t be taken lightly.

“We know they’ve signed a lot of good players and their manager actually used to be my housemate so I know a bit about how he wants his teams to play and a lot of those players he’s brought in are pretty well-known players in the Scottish game too.

“They had a huge turnover this summer but most of the guys they’ve brought in have either played at a higher level or have stood out at a lower level so they’ll definitely give us a good game and having won on Tuesday, they’ll probably come into it with confidence.”

One of Stenny’s goal scorers from their midweek game at Dumbarton was actually a Thistle player in the form of Jags loanee James Lyon who bagged his first professional goal to level the game at 1-1 and Neil explained the importance of giving the midfielder the chance to go and play games on a regular basis.

“He’s a player with massive potential and I think everyone sees that and is excited by his prospects but we felt that it was just slightly too early for him here with us and that going and playing every week would help him develop.

“At his age, getting game time like he should with Stenhousemuir will be invaluable whereas if he was here he’d maybe only be getting the odd appearance off the bench. Now, he can spend this season learning what it’s like to be a first team player who is starting games every weekend and then he will be well placed to come back and contribute as a Thistle player.”

Scally ended by giving us an update on squad fitness ahead of the trip to FK5.

“I think it’s just Shea Gordon and Darren Brownlie who are still out at the moment. We’ve had Mouhamed Niang back in training this week which is brilliant so he’ll be in the squad again. Apart from that, we’re as we were last week.”

JagZone subscribers will be able to tune in to live audio commentary for our clash with Stenhousemuir, starting at 2:30pm – click here to tune in.

The home side are offering a pay-per-view streaming option, priced at £10, for fans who are not going to the game – click here for more info.