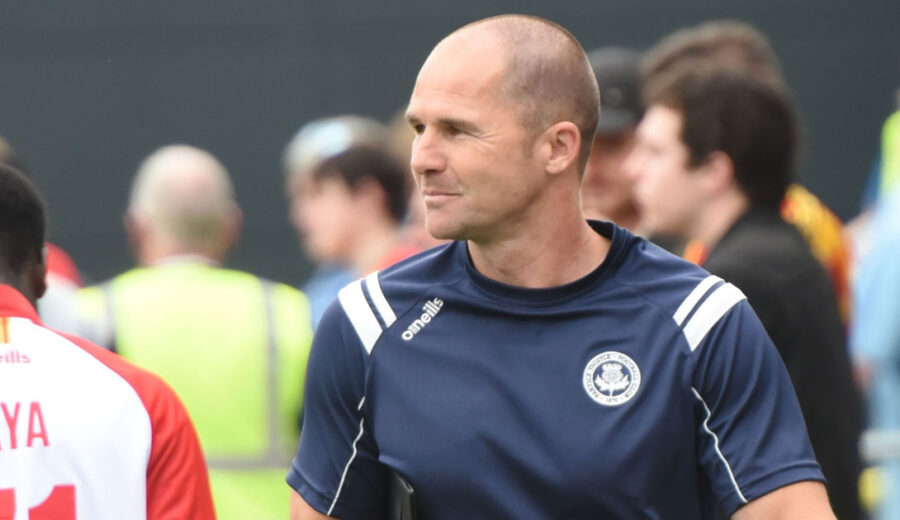 Victory over Stenhousemuir at the weekend earned Partick Thistle their first points of this season’s Premier Sports Cup group stages and the Jags are aiming to add to that with another win against Dumbarton this evening at Firhill. Ian McCall’s side need all three points against the Sons to maintain a serious chance of progression ahead of Sunday’s group stage closer at St. Mirren. Thistle assistant manager Alan Archibald spoke to ptfc.co.uk before the game:

“We’re looking forward to being back at Firhill for this one but to be fair to Stenhousemuir their pitch wasn’t too bad. It was dry and sticky as I’m sure everybody would’ve seen – we had a couple of players falling over the ball – so it will be good to be home and back onto a bigger pitch.”

Reflecting further on the win at Ochilview, Archie said the management team were pleased by a lot of what they saw in the comeback win.

“We probably created more chances in the first 30 minutes against Dunfermline than we did against Stenhousemuir but we still found some good openings and perhaps just chose the wrong option when we got into the box. We felt that we were in control for the majority of the game and were good value for the win.

“We felt that we needed to change a few things at half-time and it gave us a good opportunity to try some different players in different positions. We wanted to see Kevin Holt play alongside Steven Bell and get Ciaran McKenna to push on down the right-hand side and it seemed to work well for us.”

Scott Tiffoney was another one of those half-time alterations Alan is referring to with the number seven coming on at the break and he set up Zak Rudden’s equaliser to the delight of the manager and his assistants.

“Scott made a great impact when he came on. He gives a real threat with his pace and Stenhousemuir couldn’t live with his quality.

“The Rangers game was Scott’s first involvement with us for 10 days as well so, because he’s missed some time, he maybe needs a couple of games to get up to speed. I think the Stenhousemuir match showed signs that he was making progress in that regard so hopefully he just gets better and better with each fixture.”

Archie finished by giving us an update on squad fitness ahead of this evening’s game.

“For this game we’ll go with a similar squad to the one that played against Stenhousemuir. We’ve got a couple of players nursing minor knocks so there probably will be some tweaks to our starting line-up but we’ll give those guys every chance of playing.”

JagZone subscribers will be able to tune in to live audio commentary for our clash with Stenhousemuir, starting at 7:15pmpm – click here to tune in.

There is also a livestream option available to fans, priced at £12 – click here for more info.