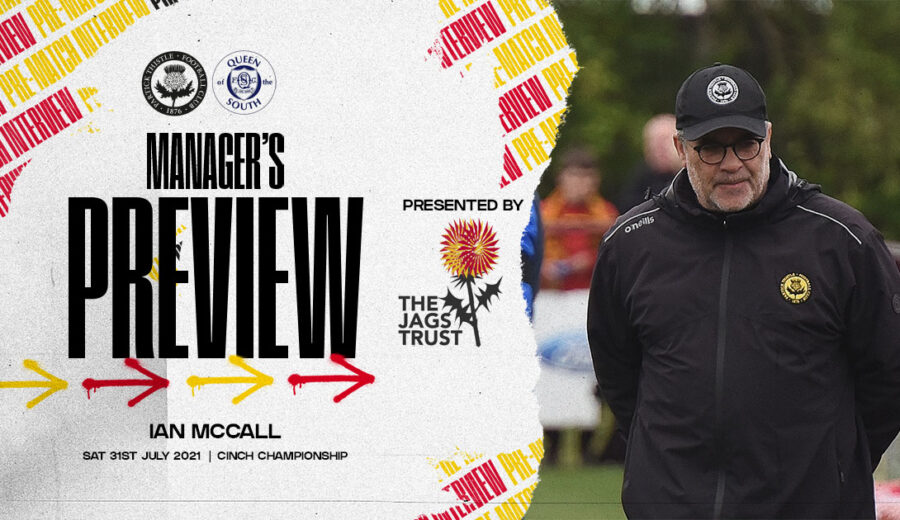 Just over three months on from their League One title triumph, Partick Thistle are back in league action this weekend as Queen of the South visit Firhill. The Jags will be looking to get off to a winning start as they begin their Championship journey for 2021/22 against Allan Johnston’s Doonhamers. The Dumfries side were most recently in Maryhill last March when a goalless stalemate was contested a couple of weeks before the country was sent into lockdown. Thistle manager Ian McCall spoke to ptfc.co.uk ahead of the big kick-off:

“Every game you play in the Championship is tough and we know this will be a real test. I went down to Palmerston last weekend and watched their game against Airdrieonians; they were excellent in that game. Allan and Sandy have done a good job there.

“We’ll have a good number of our fans in and as the home side the onus is on us to come out and be exciting and look to score some goals but at the same time there’s no doubting that they have the ability to cause us lots of problems too so it should make for a good game.”

Those fans mentioned by McCall are the Jags’ season ticket holders who will be able to attend the match and the gaffer was greeted by the good news that we’ve surpassed 2000 season tickets sold this week.

“It’s an absolutely fantastic effort by everyone. I set that target before we’d sold any so to make it all the way to 2000 is terrific for the club as a whole. I’ll be phoning the 2000th buyer soon to arrange a gift that’s going their way as a special thanks as well.

“I think it’s a sign of a togetherness at the club that we’ve not had for quite a while now. That run we had at the end of the season was just so enjoyable and that seems to have captured the imagination of the support.

“I can’t honestly say it surprised me though because we’ve got a great fan base who have just been through a lot these past three or four years. We’re now moving in the right direction and that’s why next season the target will be a bit higher.”

Looking towards the new league term, Ian said that the target has to be making the promotion play-offs for his side although he knows they won’t be the only team with that aim.

“I think if the other nine managers in the division were all sitting here with me, they’d say the exact same thing about looking to get into that top four. It’s one of the best things about the Championship – the fact that just about any team in the league can end up in those play-offs with a shot at getting to the Premiership.”

There are two new signings in contention for a debut in tomorrow’s game with Lewis Mayo and Cammy Smith set to appear in the squad for the first time this season and the manager is excited about both players.

“They’re two guys who I’m very pleased to have here. They’re really good players and good characters as well which is something I think is important. We knew we needed to add numbers but with Lewis and Cammy, we’ve added more quality as well.

“For Cammy, he’s someone who gives us options going forward. He can play as a number 10 in behind one or two strikers, he can play off the left and if we play a midfield three he can play in there.

“Lewis Mayo is another player who can cover a few positions. He’s played centre-half, right-back and central midfield but that can be a good thing and a bad thing for young players. For us, I see him playing as a centre-half and I think that’s what he’d like too. That’s not to say he won’t have to cover other positions if needs be but all being well we see him playing central defence.”

To finish, McCall updated us on team news ahead of the weekend’s fixture.

“It’s looking like we’ll be able to name a full bench for the game tomorrow which is great. We hope to have Scott Tiffoney back; he trained yesterday after missing the game last week so he should be in the squad. Kevin Holt had a knock but we expect him to be fit to play as well.”

Exclusive video interviews with Ross Docherty and Thistle assistant manager Alan Archibald will be available for JagZone subscribers to watch today – log in to view.