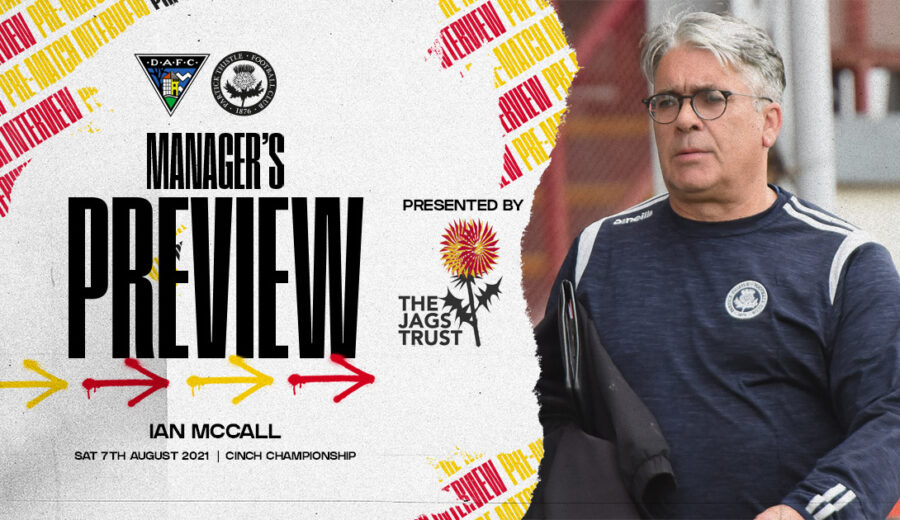 After beating Queen of the South 3-2 on cinch Championship opening day, Partick Thistle are now looking to make it two wins from two as they travel to East End Park this Saturday to face Dunfermline. They’ve already played the Pars once this season with Peter Grant’s side emerging as 4-2 victors when the teams met in Premier Sports Cup action at Firhill four weeks ago so the Jags will be keen to make sure they get a more favourable result this time around. Thistle manager Ian McCall spoke to ptfc.co.uk ahead of the fixture, beginning by reflecting on last month’s cup tie against the Pars:

“It was an action-packed game the last time we played Dunfermline; one of those ones where both teams had plenty of chances. We could have been two or three up before they even got their equaliser but we weren’t clinical and then one short spell of mistakes kills us towards the end of that first half.

“It was a game with two teams looking to score and particularly in that first half it made for quite a game. I expect similar this time round to be honest although we obviously want to cut out the mistakes that allowed them to score in that match.”

Ian says the team are excited about the weekend’s fixture after their positive start to the league season against the Doonhamers last week.

“Look, this is a game we’re looking forward to. It was great to get off to a winning start but we still feel we should have played better on the day. We’ve worked hard in training this week and we feel we’re getting closer to our best with every week that passes.”

The Jags have made some additions to the squad since that game with one of them being former Par Lewis Mayo who the manager has high hopes for.

“While he was at Dunfermline he moved about a bit and played games in midfield and at right-back but to be honest we see him as a centre-half and a very good one at that. I genuinely believe he’s got the ability to be the best centre-half in the Championship but it takes a lot of hard work to get to that sort of level. He got off to a good start last week and there’s hopefully more to come from him too.”

Another new face added to the Jags squad recently was Cammy Smith who made his Thistle debut off the bench against Queen of the South and the gaffer says he’s still building up his sharpness after his self-isolation period.

“Cammy’s someone who brings a lot of quality to the team but he was stuck inside for ten days and wasn’t able to do much in the way of training. He came in towards the back end if last week but he still needs more time to get to 100%. That’s why the two week break after the Dunfermline game will be so good because guys like him who haven’t trained as much can get up to speed.”

McCall ended by giving us an update on squad news ahead of our trip to Fife.

“In terms of squad fitness, there’s been nothing new this week so we’re still at full strength minus Darren Brownlie, of course. Last Saturday it was one of the guys off the bench that scored the winner so that shows the importance of having that squad and we’re glad to have just about everyone available at the moment.”

Exclusive video interviews with Ciaran McKenna and Thistle assistant manager Neil Scally will be available for JagZone subscribers to watch today – log in to view.

The home side are offering a pay-per-view option, priced at £12, for any supporter who wishes to watch the match – click here for more info.