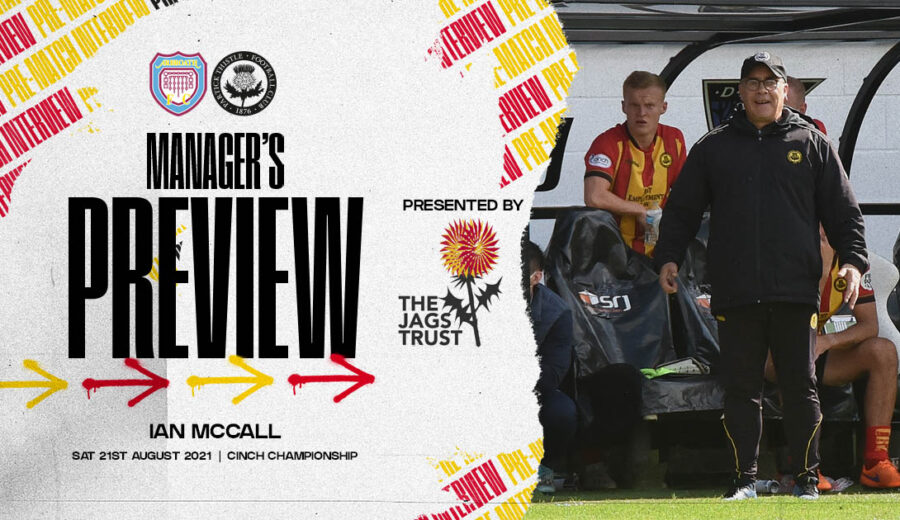 Partick Thistle return from a two-week break from competitive action this weekend as they face Arbroath at Gayfield Park. The Jags haven’t played since they beat Dunfermline 3-0 at East End Park a fortnight ago and will be to continue their winning start to the cinch Championship season as they take on Dick Campbell’s men. Thistle boss Ian McCall spoke to ptfc.co.uk ahead of the match:

“It’s going to be a really tough game up there. They’ve got a fantastic defence at Arbroath and I think that’s been the foundation of their team in recent years. The last time we were at Gayfield we didn’t play anywhere near well enough but we’ve come a long way since then so hopefully this time we can go and get the win.”

The gaffer added to the squad on Wednesday with the signing of Tunji Akinola on a one-year deal and he says he was very pleased to get that deal sorted.

“We’re hopeful that he can do really well for us. He’s been with the group for a week and a half and played in a bounce game so we had plenty of time to see what he’s like. He’s someone who can play at centre half or full back so that helps us out a lot.

“We spoke to people at West Ham to make sure he would fit in here as a person and we reckon he’s the right type of boy. He’s only 22 as well so there’s development in him but he’s got great attributes already; he’s strong and he’s quick but he’ll have to fight his way into this team.”

Jake Hastie also joined the Jags this week, signing on loan from Rangers, and the manager feels Hastie has what it takes to do really well for Thistle.

“We were really pleased to get Jake in. I spoke to him before he joined and my main point was for him to come here and enjoy his football again doing what he does best which is creating and scoring goals. That won’t be easy but he’s looked good in training and we’re looking forward to seeing what he can produce on the park.”

McCall admits he would like to add further to the group but also says that he’s very happy with the calibre of player he has available to him right throughout the squad.

“In an ideal world we’d love two more players to really solidify the depth in the squad but there is already a lot of competition. For example, at Dunfermline it was Cammy Smith, Connor Murray and Ross MacIver that came off the bench and they all played very well and then the previous week we had Scott Tiffoney come off the bench to score the winner.

“I think every player in our first team squad is good enough to play and contribute so although it’s not the biggest squad I’ve ever had, there’s plenty of quality in there which should stand us in good stead.”

The home side are offering a pay-per-view option, priced at £13, for any supporter who wishes to watch the match – click here for more info.