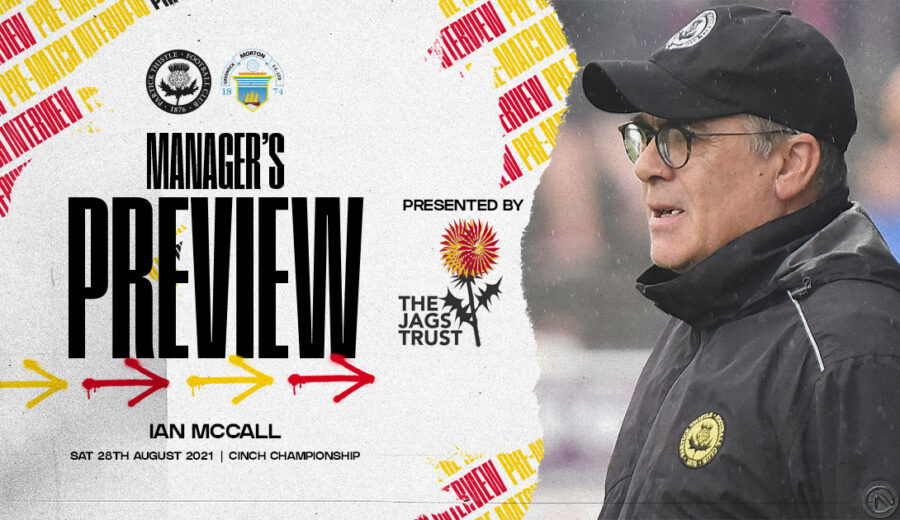 Greenock Morton are the opposition this weekend as Partick Thistle look to get back on track in the cinch Championship. The Jags suffered their first defeat of the new league season this past Saturday, losing 3-1 to Arbroath, but now look to bounce back against Gus MacPherson’s side. The Maryhill men last played at Firhill on the opening day of the Championship season when a late Scott Tiffoney goal earned them all three points against Queen of the South and they’ll hope to get the same result against the ‘Ton this weekend. Jags boss Ian McCall spoke to ptfc.co.uk ahead of the clash:

“We want to bounce back from what was a disappointing result on Saturday. Our recent record in the league stretching back to last season has been exceptional though so we’re not panicking after one defeat. It just makes this Saturday’s game a bit more important and we know it won’t be easy to get the result we want.”

Reflecting further on the loss at Gayfield Park, the manager acknowledged the self-inflicted nature of some of Thistle’s wounds.

“It was a tough game up there and we made a couple of mistakes which really cost us in the second half. Arbroath came out quickly after half-time which we just didn’t match. A lot is made about them being a part-time team but you look at some of their players like Tam O’Brien and he could play for any team in the league.”

Tunji Akinola came off the bench in the first half to make his Thistle debut at the weekend and Ian says the Englishman is settling well at the club.

“I’ve actually had the chance to show him around the West End a bit this week and we’ve sorted him out a place to stay which is great for him. He came on and did pretty well I thought in difficult circumstances. It’s a very tough game to begin with, never mind when you have to jump in with half an hour already played or whatever it was but he’s had another week’s training and will be an asset for us this season.”

The chance for Thistle to get back on track comes in the form of a game against Greenock Morton and McCall knows to expect a stern test from the Cappielow outfit.

“As I said earlier, we know it isn’t going to be easy because nothing is in this league. They went to Hamilton and got a really good win in their last away game so I reckon they’ll come here with belief that they can do the same to us.

“We have to make sure we don’t just forget everything we’d done well in our first two games just because we’ve had that setback. If we can get a win this weekend then it would be three wins from four which I’d be very happy with as a start to the season.”

Steven Bell, Ross Docherty and Jake Hastie all missed out with knocks as the Jags travelled to Arbroath last week and the gaffer gave us an update on the trio.

“Ross Docherty and Jake Hastie have been back in training and haven’t had any problems so far so as it stands they’d come into the squad for us. Both of them worked closely with the physio Jordan and came back to training looking good so that’s a boost. For Steven, we need to wait a bit longer and see how he is so he won’t be back for Saturday unfortunately.”

JagZone subscribers will be able to tune in to live audio commentary for our clash with Greenock Morton, starting at 2:30pm – click here to tune in.