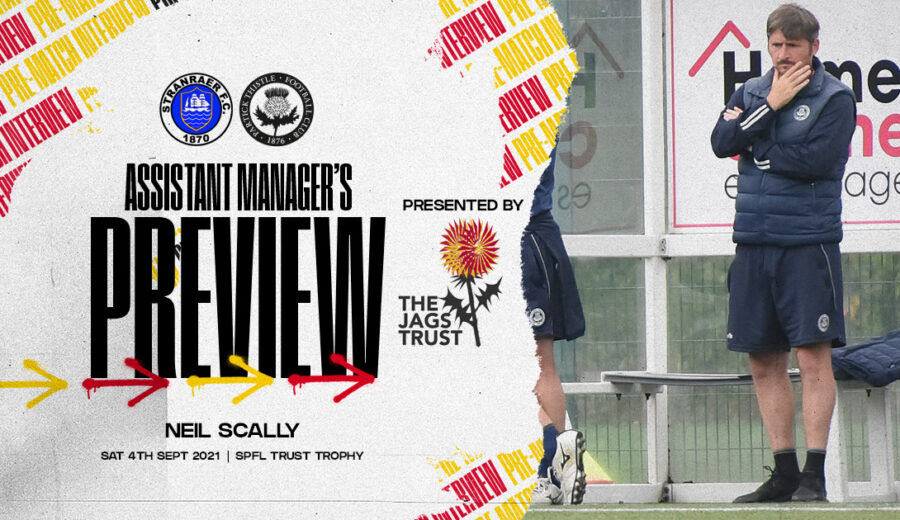 After three wins from four to start the cinch Championship season, Partick Thistle are back in cup action this weekend as their 2021/22 SPFL Trust Trophy campaign gets underway. They take on League Two side Stranraer who come into the contest off the back of a late comeback win over Cowdenbeath at Central Park. Thistle assistant manager Neil Scally spoke to ptfc.co.uk ahead of the tie:

“We head to Stranraer in a good place after the result at the weekend. It was a very good performance from start to finish and that was pleasing for us. We controlled the game brilliantly and even when they had their spell of possession, we stopped them turning it into clear shots on goal.

“Going forward we looked dangerous right throughout the game and, if we’re being really honest, we could have added a couple of more goals if we were really ruthless but you can complain too much after a 3-0 win like that.”

Scally said the clean sheet was especially pleasing considering the enforced changes that the management team had to make for the match.

“We just keep getting injuries at the back at the moment but that’s why we’ve got a big squad. Tunji slotted in excellently alongside Kevin Holt and, as I’ve said, they weren’t creating chances on Saturday.

“Our defensive base was key for us at the end of last season and we want that to be a feature for us this year too.”

Heading to Stranraer for the SPFL Trust Trophy, Neil says there may be an opportunity for players who’ve been coming off the bench to good effect recently to get a shot from the start.

“I think it’ll be a good chance for some of the players who have been contributing as substitutes to go and get minutes and get the chance to impress us. You’ve seen it over the past few weeks; the guys who come off the bench are players who can make a difference and they deserve a chance to start.”

Thistle haven’t been away to Stranraer since 2018 when the Jags ran out 5-0 winners at Stair Park but Neil says the team still know to expect a tough contest from Jamie Hamill’s side.

“It’ll be difficult, there’s no doubt about that. They’ll be right up for it and we need to give it just as much effort as they do. If we can do that then we hope that our quality will shine through but the boys know that it’ll most likely be a battle out there.”

Scally finished by giving us the latest team news ahead of our trip South-West.

“We’ve got Harry Stone, Lewis Mayo and Zak Rudden missing because they’re away with the Scotland under 21s. Steven Bell will miss out too and Ciaran McKenna is still a bit away from being in contention for a matchday squad; he’s done some training but it hasn’t been impact.

“Jake Hastie also can’t play unfortunately because he played for Rangers in the first round of the cup.”

A further in-depth interview with Thistle assistant manager Neil Scally as well as a chat with Ross Docherty will be available for JagZone subscribers to watch today – log in to view.

Unfortunately, the home side will not be offering a live stream of tomorrow afternoon’s fixture. However, JagZone subscribers will be able to tune in to live audio commentary for our clash with Stranraer, starting at 12:30pm – click here to tune in.