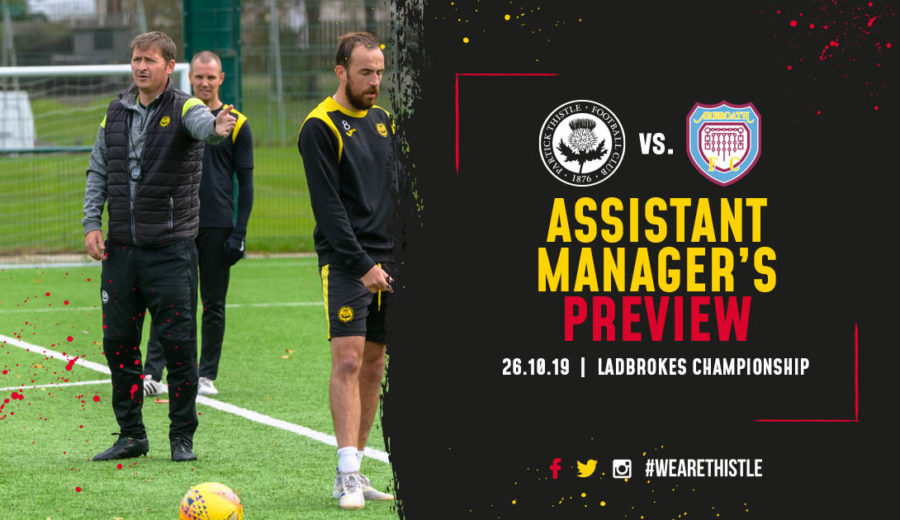 With three wins in the last four it has been a positive Partick Thistle dressing room as the squad get ready for the visit of Arbroath to The Energy Check Stadium at Firhill tomorrow afternoon. Neil Scally spoke to ptfc.co.uk to look ahead at the game, starting by reflecting on the mood in the changing room.

“It’s definitely better than when we first came in that’s for sure. Winning games of football makes everyone feel better. There is nothing better than when you get the three points on a Saturday afternoon and we’ll be looking to keep the momentum going in a very difficult match against Arbroath.”

Arbroath have adjusted to life in the Ladbrokes Championship well and the Jags assistant manager knows that it won’t an easy match by any stretch of the imagination.

“I think any Thistle fan just needs to look back at our last game against Arbroath to see how difficult it is going to be. They’ve picked up some good results so far this season but we’ve done well in the last couple of games and we’re looking to pick up another three points. We’ve won different types of matches which is pleasing. Against Connah’s Quay it was a bit more of a battle while Dundee let us have the ball at times last week, it gives us a good platform to know that regardless of what we face tomorrow, we have experience winning in different sorts of games.

“We’re taking it each game at a time and focusing on ourselves. We know we can overtake Arbroath with a win tomorrow but our focus is on us. We want to get three points, start winning games in front of our fantastic home support and begin what will be a very tough week in a positive way.”

Thistle played a closed door friendly against Motherwell on Tuesday afternoon, running out 1-0 winners against the Premiership side, and Scally feels the match was very useful for the squad.

“It was about getting players some game time. We have a big squad and we need to keep everyone fit and ready to go because it will be a long winter and we’re going to need everyone of them over the course of the season. For players like Craig Slater and Gary Harkins you would love to give them a few games to get them up to match sharpness, there isn’t a great deal of games so when you can sort one out, it gives them the chance to get out on the pitch and play a bit of extra football. It gives us a chance to see a bit more of some of the players on a pitch as we get to know them.”

Finally, Neil updated us with team news for tomorrow’s match.

“Slater and Harkins came through Tuesday’s game unscathed so they’ve got another ninety minutes under their belt. Alex Jones and Mitch Austin are a little bit further away, they aren’t quite ready to get involved with full training just yet. Dario Zanatta was missing last week but he’s been training this week so he comes back into contention for selection against Arbroath.”