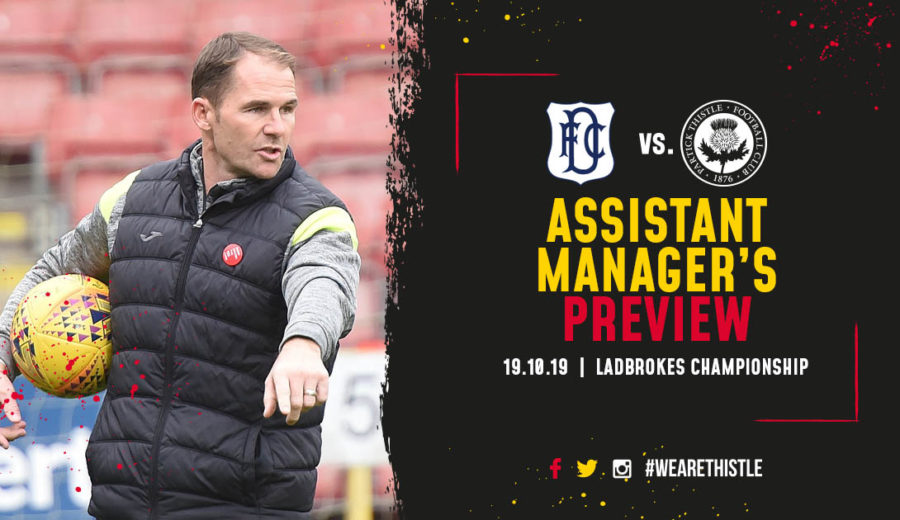 Thistle return to Ladbrokes Championship action tomorrow afternoon as the Jags hit the road to the City of Discovery to take on James McPake’s Dundee side. Ahead of the trip to Dens Park, Alan Archibald spoke to ptfc.co.uk to preview the match.

“It’s going to be a tough challenge. They have a big squad and talented squad. They have just come down from the Premiership and that brings a bit of expectancy and we have to use that against them by frustrating their fans.

“We can do that by starting well, and playing well. That will frustrate them and it will give us something to build on.”

After a physical encounter last week there was a number of bumps and bruises in the camp but Archie was pleased to report full attendance at training.

“There were a couple of knocks but you get that when you are in a battle. Sean McGinty had to get stitches above his eye, Tam O’Ware had a black eye, Penners had a cut which and Raffa took a bump but that has all disappeared by Tuesday. Everyone has been training well this week looking ahead to Saturday’s game.”

“It’s always hard when players go away on international duty, having been in the team because they don’t play for us when they are away so they have to win their places back. We did well in the midfield and defensive areas last weekend so it has given us a real conundrum as to what we go with – but that is exactly what you want. We’ve got good players, players on form who can go and give us quality if they get picked to start.”

Last week saw Thistle keep their first clean sheet in a number of games and the Jags are keen to make it consecutive clean sheets at Dens Park tomorrow afternoon.

“There was real team spirit and desire to not let them score as goal. The goal-line clearance from, it was Sean I think, was outstanding. That would have let them back in the game. We had to go and battle and do old fashioned defending, putting bodies in the way and making sure that we gave nothing to the opposition. It’s going to be very much more of the same when we go to Dundee tomorrow.”