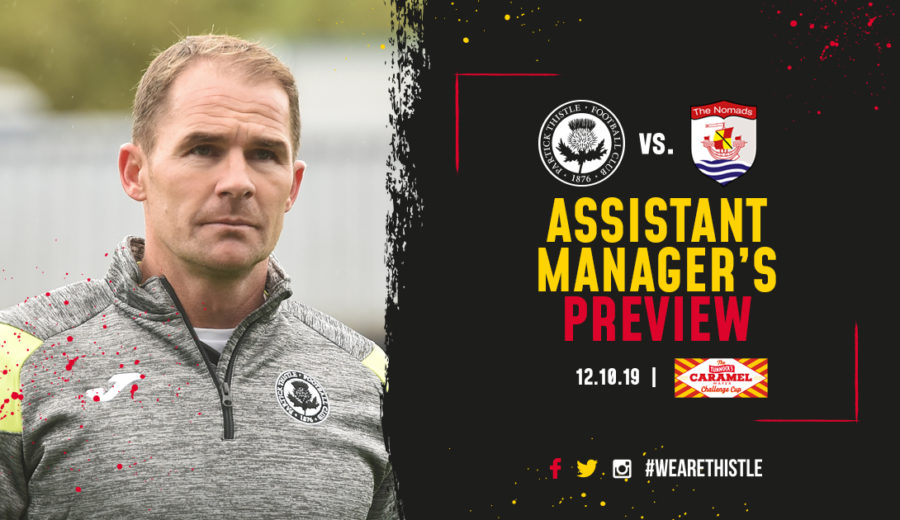 It’s back to Tunnock’s Caramel Wafer Challenge Cup action for Partick Thistle this weekend as they take on Connah’s Quay Nomads with a place in the competition’s quarter-final at stake. The Nomads made it all the way to the final of the cup last season so will provide tough opposition for the Jags who want to get back to winning ways following a disappointing defeat to Queen of the South in the Ladbrokes Championship last week. Jags assistant manager, Alan Archibald, spoke to ptfc.co.uk ahead of the clash:

“I think everyone looks forward to cup games, no matter what competition it is and it’s a great chance for us to get to the quarter-finals. I’ve got fond memories of this cup with the run to the final in 2013 and it was a terrific backing we got out at Livingston that day so I think it’s a cup that can excites the fans and players alike the further you get.”

Against Queen of the South, Thistle didn’t hit the heights that they managed the week prior against Inverness and the management team are hoping to get back on track with a victory against Connah’s Quay.

“Any victory helps the group and we’re hoping we can get back to winning ways this weekend. You saw what it meant to the boys at Inverness when the third goal went in and then at the final whistle – it meant a lot to all of them. We want to get that feel good moment again and especially at home because we’ve had a poor run of results at home this season.”

Although Alan is hopeful of a win, he’s under no illusions about the challenge they face in Connah’s Quay. Andy Morrison’s team knocked Scottish Premiership side, Kilmarnock, out of the Europa League qualifying rounds and have been in formidable form in the Cymru Premier so will be looking to book another trip to the Challenge Cup quarter-finals as they make the long trip up to Maryhill.

“It’s definitely not going to be an easy game. They obviously beat a few good teams in the cup last year and got that away win at Kilmarnock, albeit it was early in Killie’s season, but we certainly don’t expect them to roll over.

“I watched their game during the week and they’re very well organised and know their roles individually. They can be quite physical too but they don’t hide it and it’s garnered results for them so that’s something we’ll have to be mindful of. On top of that, because they’re in such good league form they’ll be full of confidence and I can’t imagine they’ll be looking to sit in and defend.”

With the potential of a physically demanding game against the Nomads, Archibald is hoping the players will stand up to the challenge and take control of the tie.

“We have to win the battle firstly and then we can try to make the pitch as big as possible and play our game. Also, we want to get more shots on goal because we didn’t test the ‘keeper enough last week and it’s no use having the ball in the final third if you can’t actually get shots on target.”

Cammy Palmer and Shea Gordon both miss the game as they’re away on international duty and Dario Zanatta is cup-tied so there will be at three changes to the side that took on Queen of the South last week and Alan is looking for those who come in and get their chance to make the most of it.

“We will have to make changes and there will be guys coming in who won’t have had many minutes since the new manager came in so hopefully they’ll see it as a chance to impress and really give it their all.”

Can’t make it to the match? JagzoneLIVE will bring you coverage of the full 90 minutes through our audio commentary service which begins begins at 5:00pm – you can listen in here.