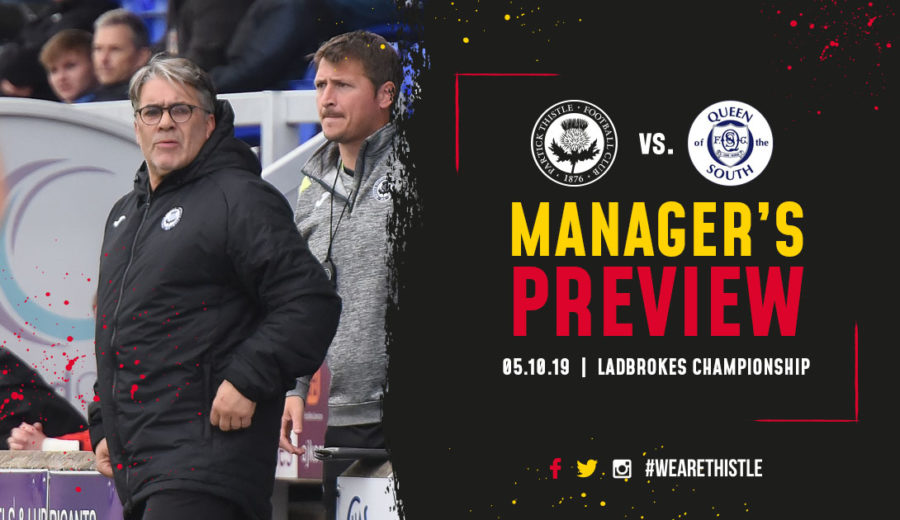 Ian McCall takes charge of a game at Firhill as Thistle manager for the first time since 2011 tomorrow as his Jags side take on Queen of the South in the Ladbrokes Championship. The new gaffer oversaw his first league game back at Inverness last Saturday, earning a terrific 3-1 win in the Highlands and he’ll no doubt be hoping for a repeat performance this week against the Doonhamers. A win for the home side would see them leapfrog Queens in the table with Allan Johnston’s side just a point above Thistle in the division standings. McCall spoke to ptfc.co.uk ahead of the clash, starting by looking back on his first couple of weeks back at the club:

“The first week was a difficult one for us as a coaching staff because we’d only had two short sessions and this feels like the first week that we’ve had them properly working with us. Nevertheless, I could tell pretty quickly that it was a better group of players than the league position suggested and that maybe we just needed a bit of confidence in the group.

“It has been very hectic over the last two weeks and there’s been a lot of press which hopefully will just calm down soon so we can focus ourselves on winning games for the club.”

Ian briefly expanded on his point about confidence and trying to get the best out of a group of players who haven’t been performing at their best this season.

“You look at the quality of player that’s here and then you look at the results that the team have had and I think it’s pretty natural to think maybe it’s a confidence issue. Also, they’ve had some bad luck like when they were playing Ayr and got two boys sent off having been probably the better team for the first half but I definitely think that building up this team’s confidence is going to be the key to getting them winning games consistently.

“The best way to build that confidence is undoubtedly to win games which is why Saturday is such a big game for us. Last weekend was great and it lifted the spirits a bit but it’s going to take a string of results to get this team where we want it to be mentally.”

The gaffer spoke about how he’s dealt with the players in his time since being appointed, telling us that every player has a clean slate.

“We’ve been honest with the guys and said that everyone has a fresh start. Everybody has got until January and even then, I don’t think I’ll make huge changes in January so everyone will get their chance to impress and earn the opportunity to play longer at this magical club.”

Queen of the South are the opposition this weekend as Ian McCall returns to Maryhill as Thistle boss and he’s aiming for all three points against the Doonhamers.

“Outside of the top two teams in this league, I don’t think there’s much between the other eight at the moment so it’s up to us to take the game to them. It’s at home too and the team’s record at home in the league isn’t great so we have to try to put that right with a victory tomorrow.”

With almost a full squad to pick from the Jags gaffer will have plenty of tough decisions to make over who gets in his starting line up.

“We have only the long term players out injured. Craig Slater managed to get through 45 minutes in Tuesday night’s City of Glasgow Cup tie against Queen’s Park which was the plan. It’s too soon for him, or Gary Harkins for that matter, to come into the squad for the game on Saturday.”

Finally, Ian had a message for the Jags fans who he hopes will turn out in plenty of numbers for the game against Queens.

“The supporters were awesome last Saturday. We’re back at Firhill this week and it’s a stadium that can have an incredible atmosphere so I hope we see plenty of fans for the game. The support from the stands definitely helped the boys at Inverness and a big support at home would help again this week.”