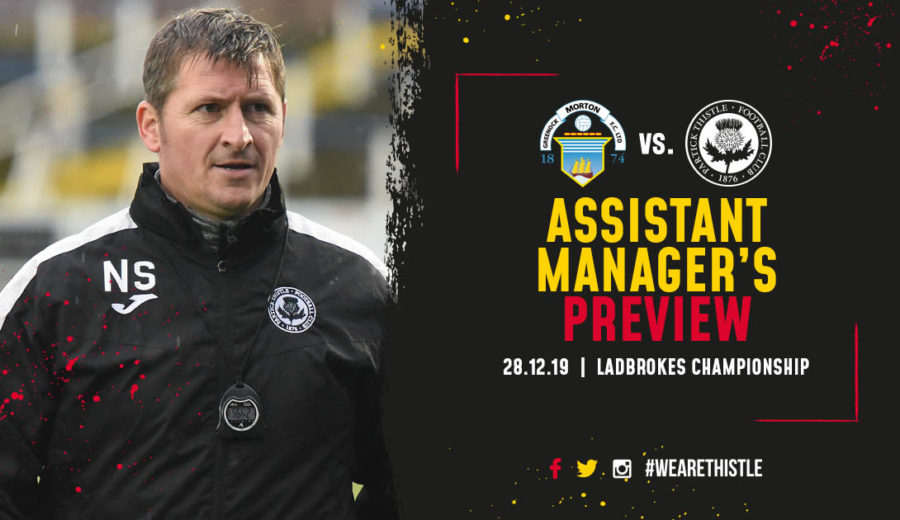 Partick Thistle play their final game of the decade as they take on Greenock Morton away from home this Saturday. The Jags will be hoping to move ahead of their opposition with victory at Cappielow and dispel bad memories of their last trip to Inverclyde when David Hopkins’ side came from two down to win 3-2 in the final 20 minutes of the contest. Jags assistant manager, Neil Scally, spoke to ptfc.co.uk to preview the clash beginning by discussing the week’s training:

“It’s pretty much been a normal week for us. We usually don’t have the boys in on Wednesday and Christmas fell on a Wednesday so everyone got the chance to spend that with their families which was great and it means it’s been a standard week for the team in terms of training.”

We’ve had mixed fortunes against Morton so far this term but Scally feels there are a few key attributes we need to show to come away with three points this time round.

“We have to match their endeavour and physicality. They’ve been a very good home team this season and have a direct style of play so for us we’re preparing the boys for that and making sure we can meet the challenge head on.”

In the last game against the Ton, Thistle battled to a 2-1 victory despite losing Stuart Bannigan to a red card early in the second half and Neil is hoping the qualities shown that day are on show tomorrow.

“When we beat them at home I think we saw that endeavour that I’m talking about. Everyone was fighting for every ball and fighting for each other and a lot of the time in this league you need that. Having that spirit and drive to win those 50/50s and tackles is key.”

Neil then gave us a squad fitness update from the week.

“Steven Saunders took a nasty one to the face which is still bothering him but it shouldn’t stop him from playing. Lewis Mansell has been back in training this week after a bit of time out and Shea Gordon did a bit of running so is moving closer to a return to training but he’s now gone home to spend some time with his family.”

He finished by updating us on the progress of talks involving Reece Cole and Osman Kakay’s respective loan extensions.

“We’re trying to get something done for both of them and I think both would be happy to stay but it’s going to come down to what the parent clubs want so we just have to wait and see what happens on those fronts.”