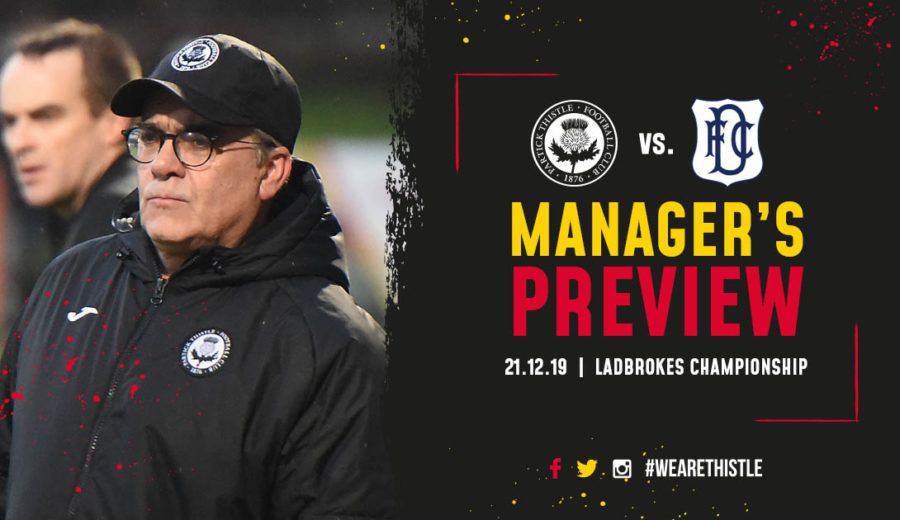 Off the back of a 3-1 win over second-placed Inverness last Saturday, Thistle have another tough home game on their plate as Dundee come to Maryhill. The Dee ended a four-game winless run with a thrilling 4-3 victory over Dunfermline and will be keen to extend their return to form in Glasgow. As for the hosts, it’s now just one defeat in seven with including their first back-to-back league wins of the term and they have the chance to make it three-in-a-row this weekend. Jags boss, Ian McCall, spoke to ptfc.co.uk ahead of the clash:

“Yeah, I’m delighted with our form. I did say to the players to ignore the Dunfermline game, although I found it hard to ignore it. We’re on a good run and it’s now a substantial run – it’s not just 2 or 3 games. In the Championship, every game offers different types of challenges and outwith Dundee United anyone can beat anyone else.”

McCall is expecting a very difficult game against the Dark Blues who currently sit in fifth place, seven points ahead of the Jags.

“It’ll be a very tough game on Saturday. We beat them 3-1 at Dens Park in October in one of my first games but they have a lot of very good players. It’ll be tough. They’ve got a lot of quality in their ranks and they got a win last week so they will be in confidence.”

With the side’s recent run of results, Thistle have moved four points clear of bottom spot and into eighth but the gaffer is wary of the team getting too far ahead of themselves.

“Our target was always to be in within 5 or 6 points of 4th place by the end of the second round of fixtures. If we win on Saturday we could be within 4 points depending on results, but you can’t count your chickens.

“Our poor start means we’ll need to win more than three in a row to get there but if we win on Saturday, that’ll be three wins in a row and that isn’t a bad place to start.”

The winter transfer window is edging closer and the manager hopes that players will use that as motivation to go and prove they deserve to be hear past January.

“I’ve been completely honest with the players. Every manager will look to strengthen and change in January and I am no different to them. Everybody has had opportunities to show what they can do. There have been players who have done well and shown what they can do, it’s up to them to continue that and keep it going.”

McCall then touched on the status of the three young loanees whose current deals would be up next month as things stand.

“We’ve got three loans who are up in January and we’re working really hard to keep Reece Cole and Osman Kakay until the end of the season. We’ve got Cammy Palmer as well but his loan expires a little later in January. It’s not any different to what other clubs in the division will do, everyone is looking to do business and it’s whether you can get them over the line.”

Ian finished by discussing the recently announced extension of Just Employment Law’s principal sponsorship of Partick Thistle and how that helps him in the footballing department.

“It’s great to get the backing of Just Employment Law for another season. The stability that getting sponsorship deals done early brings is great. It allows us to plan for the future and start offering players who are out of contract at the end of the season, and that we’d like to keep, deals early to try and tie them up. It all helps and brings a bit of stability to the club.”