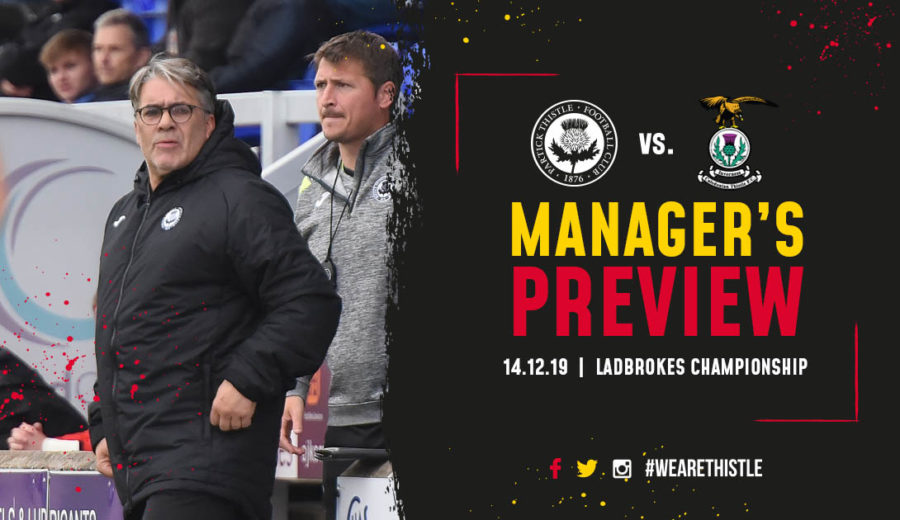 After lifting themselves off the foot of the Ladbrokes Championship table with victory over Queen of the South, Partick Thistle will look to climb another place this weekend as they take on Inveress with Morton sitting just one point above the Jags. The Maryhill men have tasted defeat just once in their last seven and are unbeaten in three games at home but the challenge of second-placed Inverness will be a stern one as John Robertson’s side look to exact a measure of retribution for the 3-1 defeat they suffered in September at the hands of the Jags. Thistle boss, Ian McCall, spoke to ptfc.co.uk ahead of the clash with Caley:

“We are on a pretty good run at the moment and we’ll look to continue that against Inverness. We’ve had some really good wins against Morton and Queen of the South in particular and things are good at the club.

“We’re off the bottom of the table now too but we aren’t thinking about that too much at the moment. We have back-to-back home games now so it’s a good chance for us to get some more points on the board and we’ll see where we are after that.”

Ian’s side produced a spirited fightback in Dumfries last week as goals from Joe Cardle and Reece Cole flipped the game on its head and saw the away side take all three points and it was the manner of the victory that impressed the gaffer most of all.

“The players showed a lot of passion and heart in that game. We were one down with 20 minutes to play and at that point you’d probably take a point but they battled back, got their equaliser and didn’t sit back. They pushed for another and got what they deserved based on the second half so that was really pleasing to see.”

McCall highlighted the importance of the players’ fitness in allowing them to stage their late comeback last weekend.

“We think the players are very fit now, not that they weren’t before, but they’re now at the point where they can push right to the very end of games and I think you saw that last week. We really came onto a game in the second half and were the stronger team for the last 25 minutes or so.”

The aforementioned Cole grabbed the winner at Palmerston Park to make it four goals in five games for the Englishman and the manager is hoping to extend Reece’s loan until the end of the season soon.

“Reece is a quality player and can be a difference maker in tight games as he was against Queen of the South. He’s a great passer, is comfortable with the ball at his feet and is adding goals to his game too so we’re talking to Brentford and hope to have him for the whole season.”

To finish, Ian gave us the latest team news ahead of the meeting with Inverness.

“We’re pretty much in the same place that we were last Saturday. Obviously, Tam O’Ware comes back from suspension to give us another option in defence and Alex Jones has had another week’s training with no problems so that’s really all there is to say.”