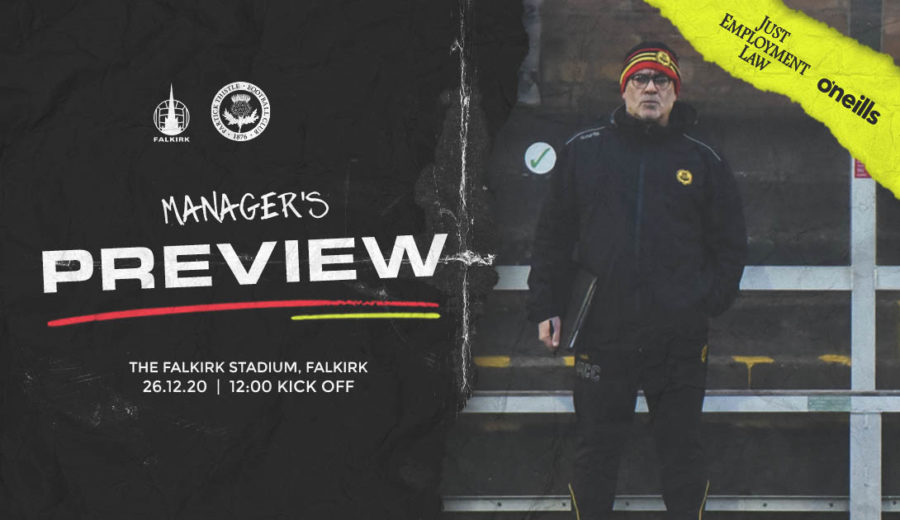 Supporters are reminded that, due to floodlight issues at the Falkirk Stadium, Saturday’s fixture will kick off at 12 Noon.

Partick Thistle travel to Falkirk this weekend with a big three points on offer against the League One leaders. Both side suffered defeat last time out with the Jags falling to a 1-0 defeat by Peterhead while Falkirk lost to Airdrieonians by the same scoreline. Now, the two teams face off and the Maryhill men can close the gap between the pair to three points with victory. Ian McCall spoke to ptfc.co.uk ahead of the clash:

“It’s a huge game of course. At this point in the season, when we’re six points behind, every game is vital but getting the chance to cut the deficit at their ground is a massive one. Last weekend was a disappointment but we’re completely focused on bouncing back and getting the win.”

The festive period is always an exciting time in the footballing world but the gaffer feels the absence of fans will give it a different feeling this year.

“Festive games are usually some of the best of the year and going away to Falkirk on Boxing Day would have been a great one with the fans. I’ve no doubt that we’d have taken a big support and there would have been a unique atmosphere about the game so of course we’ll miss that. However, the players know how important it is and even without the supporters there, we’ll be up for it.”

The Jags’ defeat by Peterhead was the first since the end of October and McCall says the players have worked hard in training to make sure they’re well-placed to return to winning ways this Saturday.

“We should have done so much better on Saturday for the amount of the ball we had. Thinking back we barely worked the goalkeeper and that was the main frustration for us because, although they defended very well, we still had some openings where we could have worked the ‘keeper.

“We’ve worked on that final ball again this week in training; trying to turn possession in good areas into chances because looking at the last two home games, we’ve found space in the final third and just been unable to turn that into shots on goal for whatever reason.”

The Jags welcomed Ciaran McKenna and Zak Rudden back to the matchday squad last Saturday and the manager is happy to see some of the injured players making their comeback.

“It was great to have those two back and Rhys Breen came back the week prior so that’s great. It gives me more options both in terms of the starting XI and then the substitutes off the bench. Zak in particular gives us a different dimension up front and I was pleased to get him on the pitch for a bit last week. The more minutes he gets will help his sharpness too.”

The manager finished by offering an update on team news ahead of the Boxing Day meeting with the Bairns.

“Brian Graham is 50/50 at the moment; he might make it but we’ll have to wait and see on that one. Blair Spittal has been back in training but Saturday might come a little too soon for him.”

JagZone subscribers will be able to tune in to live audio commentary for this weekend’s clash with Falkirk – click here to tune in.

We’ll also have extended highlights and a full game replay of our trip to the Falkirk Stadium on JagZone this Saturday evening.