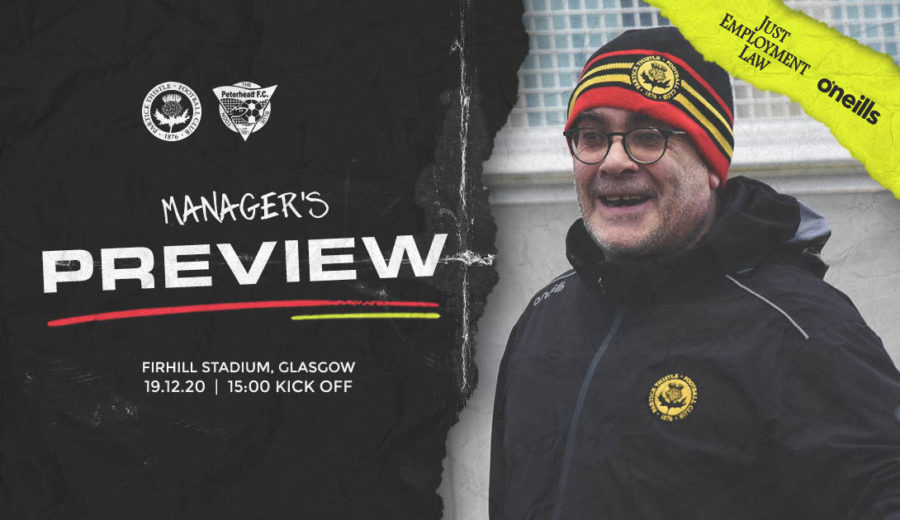 It’s back to Firhill this weekend for Partick Thistle as they welcome Peterhead to Maryhill for their final pre-Christmas fixture. The Jags took all three points from Forfar last Saturday as second half goals from Shea Gordon and Ross Docherty helped them to a victory which lifted them into second place in League One. Next up for Thistle are Peterhead, who won last time out against East Fife and know that a win could take them as high as fifth. Jags boss Ian McCall spoke to ptfc.co.uk ahead of the game:

“It’s going to be another really tough game this weekend but every game is like that. We’ve seen a few surprise results in the last few weeks and it just goes to show that you have to be fully locked in for each game you play.

“We were happy to get the win at Forfar and I think we looked well on top in the second half in particular. Over the past few weeks we’ve shown a level of consistency in our play and we just need to make sure we’re sticking away chances because you saw the difference that second goal made at the weekend; it was much less nervy with that cushion.”

The big news of the week for the Jags was Mouhamed Niang’s contract extension which will keep the 21-year-old at the club until at least 2023 and Ian was full of praise for him.

“Mouhamed has really earned the deal but I’ve already told him that he needs to work even harder now. He got his chance in the defence because of injury but has made the most of the opportunity and has been a standout for us. The whole backline have been excellent and their hard work shows in the run of clean sheets we have had.

“He’s a great boy as well. He’s a really determined type and is always looking to learn so we’re delighted that he’s just got better and better every week. As I’ve said it’s now up to him to keep up what he’s been doing because if he can keep playing in the way he has been then there’s no way he comes out of the team.”

The gaffer was delighted to get a promising young player like Niang on an extended deal and said that the new contract was important both short and long-term.

“Obviously, it’s very important to get your best players tied down to longer deals. You see it happen to a lot of clubs where they’ll lose their best players for nothing because they weren’t thinking far enough ahead and we certainly don’t want that to happen to us and the board have been great in helping me to get this deal done.

“There are other guys who I’ve already identified as players who I’d like to extend but as much as we want to set ourselves up for a great future, the short-term goal is to keep winning games.”

Ian ended by giving us an injury update ahead of the weekend’s league fixture.

“I won’t tell you exactly who they are right now but we’ve had two players back in training for most of this week who we hope will be back in the squad. We’ll have Billy Owens and James Lyon in the squad once again and hopefully the bench will be looking a bit healthier this week than it has previously.”

More exclusive preview interviews with Thistle assistant manager Neil Scally and James Penrice will be available for JagZone subscribers to watch today – log in to view.

JagZone subscribers will be able to tune in to live audio commentary for this weekend’s match – click here to tune in.

We’ll also have extended highlights and a full game replay of our clash with Peterhead on JagZone this Saturday evening.