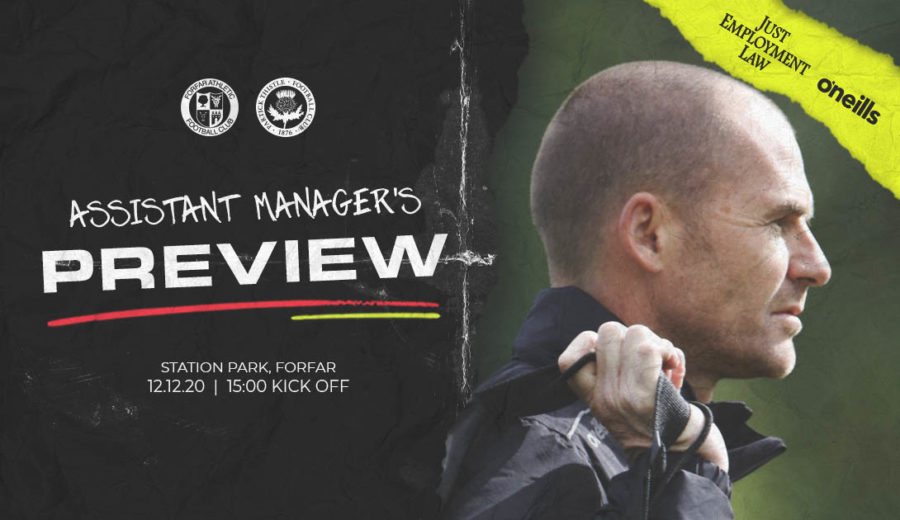 After a frustrating home draw with Dumbarton last weekend, Partick Thistle look to get back to winning ways with a trip to Station Park to face Forfar Athletic in League One this Saturday. The Jags weren’t able to make the most of their complete control over the game against the Sons as the two sides shared the points in a goalless stalemate, denying the Maryhill men a chance to record a third consecutive league victory. This week’s opponents, Forfar, sit bottom of the division but did get their first win of the league campaign in their last game, against Peterhead a fortnight ago. Jags assistant manager Alan Archibald spoke to ptfc.co.uk ahead of the clash:

“The lads are still full of confidence. Of course, we were very disappointed not to get the win against Dumbarton but the team gave it their all and we’re just looking forward to playing this game now. Our last away game at Montrose was a good victory with a very impressive clean sheet so we’re hoping to get the same result against Forfar.”

Looking back on last Saturday’s draw, Archie says the Jags have to be more clinical in front of goal to make sure they turn possession into points.

“That’s the main lesson from the game at the weekend, we have to put our chances away. Obviously the penalty was a big moment but I felt like we created plenty after that to go and win the game comfortably.

“Another thing we took from it was that we need to work the goalie more because he didn’t have that much to do considering how many great areas we got into, particularly with Ryan Williamson and Joe Cardle down the right hand side, so we want to make sure we make the most of every time we get in behind the opposition defence.”

On a more positive note, the clean sheet the Jags kept against Jim Duffy’s side represented their fourth on the bounce and Alan says the management team have been really pleased by the defensive showings in recent weeks.

“We’ve been absolutely delighted with how the defence has been playing. Apart from the Morton game, Kieran Wright has had very little to do actually which is a credit to the guys in front of him. It’s not always easy in games where you have lots of the ball because you can sometimes get caught on the breakaway but we’ve kept it very tight recently.

“That was a pleasing aspect of the Dumbarton game. We never really looked in danger of conceding and we were winning a lot of 50/50 balls in the middle of the park to keep us on the attack so we just need to continue that this week.”

Like Dumbarton last week, Forfar are coming into their game against Thistle off the back of a free weekend and Archibald says that makes it a bit more difficult to predict how they’re going to set up.

“It means we don’t have footage of them from last week to watch which is a bit frustrating and also having that extra bit of time might be good for some of their injured players because I think they had quite a few out like us.

“From our perspective, we just have to focus on ourselves and carry the same application and tempo that we showed last weekend into this game.”

Despite the Loons sitting bottom of the League One table at the moment, Archie knows you can’t take any team in the division lightly.

“This is a league where nothing can be taken for granted. There will be teams who play really poorly one week and then the next week go and get a win you wouldn’t have expected so we know we’ll have to be at the top of our game to come away from Station Park with all three points.”

JagZone subscribers will be able to tune in to live audio commentary for this weekend’s clash with Forfar – click here to tune in.

We’ll also have extended highlights and a full game replay of our trip to Station Park on JagZone this Saturday evening.