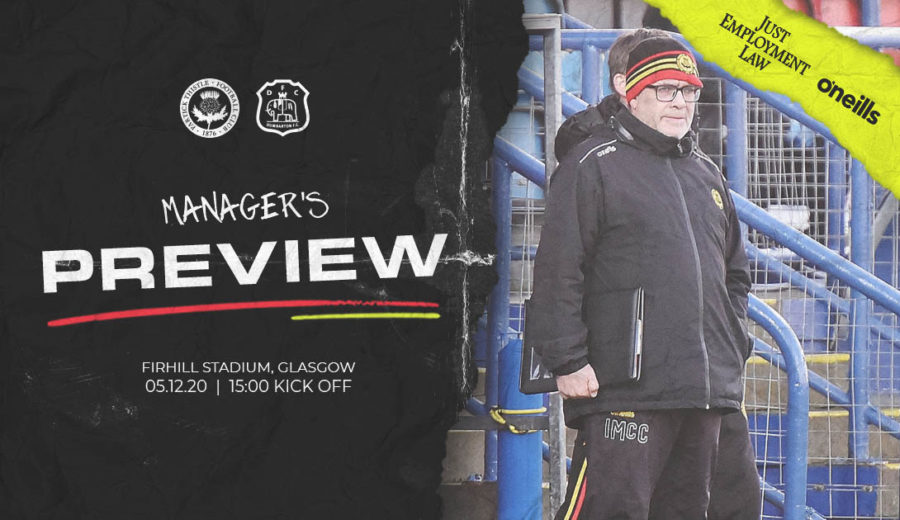 After back-to-back league wins against East Fife and Montrose, Partick Thistle are looking to make it three on the bounce when Dumbarton come to Maryhill this weekend. The Jags enter December four points off league leaders Falkirk and three points above the visiting Sons who occupy sixth position. Thistle boss Ian McCall spoke to ptfc.co.uk ahead of the contest:

“We were really pleased to win last weekend. It was one where we had chances to make it more comfortable but we didn’t take them and then at the end they were putting us under some pressure but we withstood it well and got a good three points.

“We’re on a decent run at the moment. The wins have been crucial but we need to keep that up and if we can go and make it four or five wins then it will be a great run so that’s the aim for us. All the players are focused on this Saturday’s game which will be another tough one.”

The gaffer gave a special mention to the defence who more than played their part in the recent run of clean sheets.

“The defence have done brilliantly the last few games. Sena has done really well and I think Richard Foster has been great at left-back so far but it’s not ideal by any means. We just have to keep doing what we’re doing for the next three or four games until we start getting some of those injured guys back. They won’t necessarily come straight into the team but it will make the squad a lot stronger once they’re available again.”

Thistle’s go-to man for goals so far this season has been Brian Graham with the number nine netting four times in five league games this term but Ian has been particularly impressed by his all-round game alongside finding the back of the net.

“Brian was a bit down on himself on Saturday because he didn’t feel like he played that well but even when he isn’t having his best game he’s still doing a huge amount of work for the team in terms of defending our box from set pieces and pressing up front so he has a big influence on the game no matter what.

“He’s someone who always wants to win and that’s what we need. I said that when I got him here, and his mentality is great for the team.”

McCall ended by giving us an update on the squad’s injury list and when we should expect to see a few players making a return to the squad.

“There won’t be anyone coming back into the squad this weekend unfortunately. We hope that in the next few weeks we’ll see two or three guys back in training and if they can get a few days of training then they may be able to make the bench but certainly this week none of those guys will be back.”

More exclusive preview interviews with Thistle assistant manager Neil Scally and Connor Murray will be available today for JagZone subscribers to watch – log in to view.

JagZone subscribers will be able to tune in to live audio commentary for this weekend’s clash with Dumbarton – click here to tune in.

We’ll have extended highlights and a full game replay of our clash with Dumbarton on JagZone this Saturday evening.