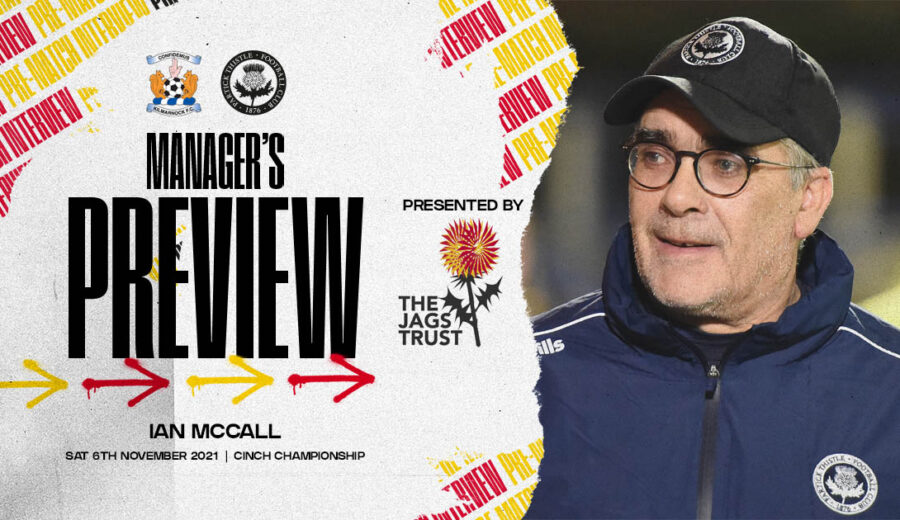 After three straight goalless draws, Partick Thistle are looking to get back to winning ways as they head to Rugby Park to take on Kilmarnock this weekend. When the two sides last met, a Kevin Holt own goal and an Oli Shaw wonder strike were the difference as Tommy Wright’s men took the three points. Now, the Jags are looking for revenge against the league leaders knowing a victory would bring them to within five points of their Ayrshire adversaries. Thistle boss Ian McCall spoke to ptfc.co.uk ahead of the game:

“As we always do, we’ll go into the game looking to win it. Kilmarnock are in good form at the moment but no team’s unbeatable in this league so we can’t fear them at all. Although we’ve drawn the last three, we’re now unbeaten in five conceding only once in that time so we have to go to Rugby Park with confidence and belief.”

Thistle’s spat of goalless stalemates came rather out of the blue for McCall’s side but the gaffer is confident his side can turn things around in the forward areas.

“It’s been very strange over these past few games. If there’s one thing we’ve not lacked since the turn of the year really it’s been a goal threat but we’ve struggled to carve out chances in these past three games.

“We believe we’ll turn it around though. We showed across the first quarter of the season that we can be a real attacking threat so we just need to find a way to get back to that. Maybe because we’ve gone away from home and scored six teams are focusing more on ways to stop us but even if that’s the case, we need to find ways to score.”

At the other end of the park things have been a bit more rosy for the Jags with Jamie Sneddon in impressive form and the manager had some specific praise for the ‘keeper.

“Jamie’s been fantastic for us lately. He made some mistakes earlier in the season and came out the team for a couple of games but he’s really bounced back from that and is now looking like a very reliable pair of hands in goals.

“In reality, he’s not had too many saves to make over the past five games but in the big moments he has performed well. He had important saves against Dunfermline and Morton and then obviously the penalty save against Inverness stands out as well.

“The challenge for him was always to establish himself as our number one and at the moment he’s doing that. His saves, the command of his box and his distribution have all been off a very high standard so he now needs to continue that over a longer period.”

McCall also said he was happy with the balance within the back four as he finally seems to have found a settled unit in defence.

“Unlike most teams in the league, we’ve got two young centre-halves and a young goalkeeper. Our experience at the back comes from our full-backs in Richard Foster and Kevin Holt but, to be fair, Lewis and Tunji were both playing first team football at good levels last season so it’s not as if they’re just making the step up.

“They’re still learning though and I think Saturday’s game against Inverness was one they’ll have learned a lot from against a very smart striker in Billy McKay. Each game will be teaching them different lessons but we’ve been very pleased with those three younger boys recently.”

Finally the gaffer brought us up to speed with team news.

“We’ve welcomed Harry Stone back to training this week and he will now put some real pressure on Jamie Sneddon to keep playing well. Getting Harry back has allowed Mason McCready to return to his own loan which will be great for him to go back out and get games under his belt, which he needs as a young goalkeeper. We’ve got a full squad apart from the long term absences of Steven Bell and Darren Brownlie.”

Exclusive video interviews with Scott Tiffoney and Thistle assistant manager Neil Scally will be available for JagZone subscribers to watch today – log in to view.