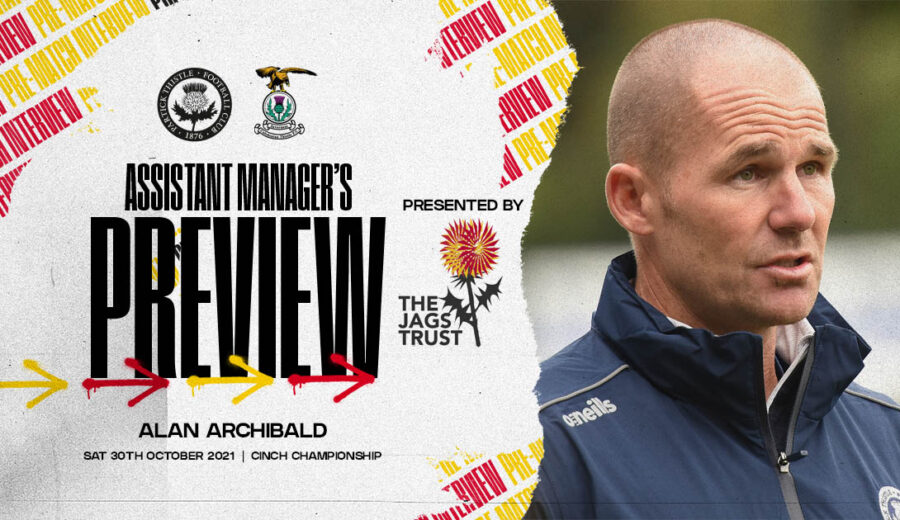 Following consecutive goalless draws against Dunfermline and Greenock Morton, Partick Thistle will be aiming for a return to their attacking best as Inverness visit Firhill this weekend in the cinch Championship. The Caley Jags were knocked off the league summit in midweek after losing to Arbroath at the Caledonian Stadium having led the division since matchday four and Thistle now know they can come to within three points of Billy Dodds’ side if they can beat the Highlanders this weekend. Jags assistant manager Alan Archibald spoke to ptfc.co.uk ahead of the clash:

“At this point of the season things are a bit different because you know what to expect a bit more than you do during the first quarter. With Inverness, we’ve played them and I’ve had the chance to watch a bit of their footage as well so we know what we’re going to get from them.

“They lost during the week but that’s only one of two or three losses all season I think so they should still be confident coming down here but I think we are too. When we played them last time we felt we more than matched them in the first half and actually could have been a couple up before they then deservedly turned the game around in the second half.

“It was disappointing to come away with nothing from that game but we can take the positives from the first half and look to put that sort of performance in for the full 90 minutes this time round.”

The team played their first midweek game of the league season on Tuesday as they fought to a stalemate against Greenock Morton at Cappielow and Archie told us about how the squad have managed their recovery ahead of Saturday.

“The good thing is that we’ve got recent experience of back-to-back games from last season so the players are able to deal with it pretty well. As it was then, we just have to manage workloads and make sure we don’t give anyone too much to do especially after two toughly-contested games that were tight all the way through the 90 minutes.”

Looking back on Tuesday’s game in more detail, Alan said that the team came off the pitch disappointed that they only got one point.

“It was another frustrating game for us. The end product wasn’t quite there and that meant we didn’t get the win that we wanted. Zak had a good chance early on with Tiff on the follow-up and if that goes in then who knows how the game pans out but overall we didn’t do enough to win it and can’t really complain that we only got a draw.

“Everyone was desperate to get the win, especially after a fairly poor game on Saturday, but as I say we didn’t deserve more than a point. We had a couple of spells where we looked dangerous but we weren’t creating enough chances and that’s been the common theme of these last two games.”

Defensively it was another clean sheet for the Jags and Archie had specific praise for Jamie Sneddon in the Thistle goal who made it four shutouts in his last eight league games as he played an important role in midweek.

“Jamie did really well again in a few different ways for us. He was coming out for corners and making catches or punching it away which we needed towards the end of the game when Morton were delivering some good balls into the box and also his distribution was great. When he comes to make a catch he’s staying alert and using the quick options if they’re on which lead to a few decent openings for us.

“He’s been a part of that defensive unit which we haven’t changed much recently and they’re doing really well. I think it’s three clean sheets in four league games which is really positive for us and now we just need to make sure we’re creating at the other end to compliment what we’re doing at the back.”

Alan ended by giving us the latest team news ahead of the game against Caley Thistle.

“There aren’t any changes to talk about at the moment. As you’d expect after a couple of games in quick succession there are a few little knocks here and there but they won’t stop anyone from playing this weekend.”