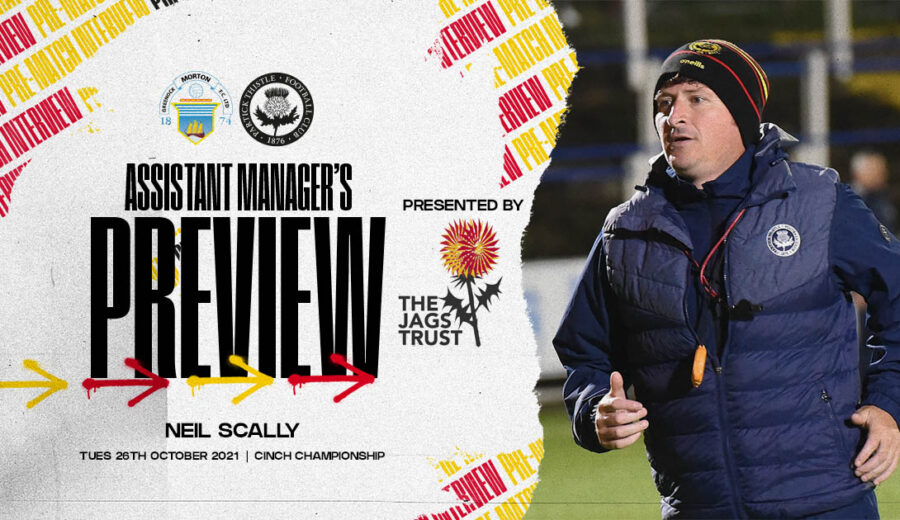 Partick Thistle are back on their travels on Tuesday night as they make the trip to Cappielow to take on Greenock Morton. The Jags will be hoping to get back to winning ways after a disappointing 0-0 draw against Dunfermline on Saturday while Morton will be looking to end a run of eight league games without victory. Thistle assistant manager Neil Scally spoke to ptfc.co.uk ahead of the game:

“I think Saturday’s game was below the levels that we’ve come to expect as a team so having a game straight away on the Tuesday gives us a chance to bounce back. Although we weren’t at our best against Dunfermline, we know we’re capable of better so we have that belief going to Cappielow that we can get the three points.”

Reflecting on the Dunfermline game further, Neil admitted it felt like a bit of an opportunity missed for the Maryhill men.

“We went into the game looking to win and we certainly had enough of the ball to go and win the game but we just struggled to create chances for whatever reason. They came with a game plan which was to sit in and keep things compact and that meant we had to be proactive in breaking them down but we couldn’t manage it in the end.

“They didn’t leave much space at all for our attacking players to work in but we still should have been able to create more than what we did. It wasn’t a lack of effort though and we threw plenty at it towards the end of the game but it just didn’t happen for us.”

Going forward, Scally expects there will be more games like Saturday’s where teams challenge Thistle to break them down and he knows the Jags will need to find a way to score goals against stubborn opposition.

“It’s always tough when teams sit a lot of players behind the ball but I think we might see more of that because of how many goals we’ve scored already this season. In games like that though, the longer it stays 0-0 the tougher it gets whereas if you can grab a goal early even from a half-chance or something then it changes the whole complexion of the game.”

The draw on Saturday represented a third clean sheet in four home games and Neil says the management team have been very pleased with the way the backline has developed this season.

“We’ve been able to keep a consistent selection in the last few league games and I definitely think that’s helped the defence. The partnership of Tunji and Lewis looks really strong and with Richard Foster and Kevin Holt in there too, we look pretty solid at the moment.

“Dunfermline only really had one clear chance at the weekend and when it came, Jamie Sneddon comes out and makes a great saves so we’re really happy with how that defensive unit is working at the moment and hopefully they just continue like that.”

Scally finished by giving us the latest update regarding team news.

“There’s no real change on the injury front at the moment so it’ll be the same squad available as last week. Kevin Holt obviously had that knock but he was able to play with it on Saturday and hasn’t had any problems since then so he should be fine again.”

JagZone subscribers will be able to tune in to live audio commentary for our clash with Greenock Morton, starting at 7:00pm – click here to tune in.