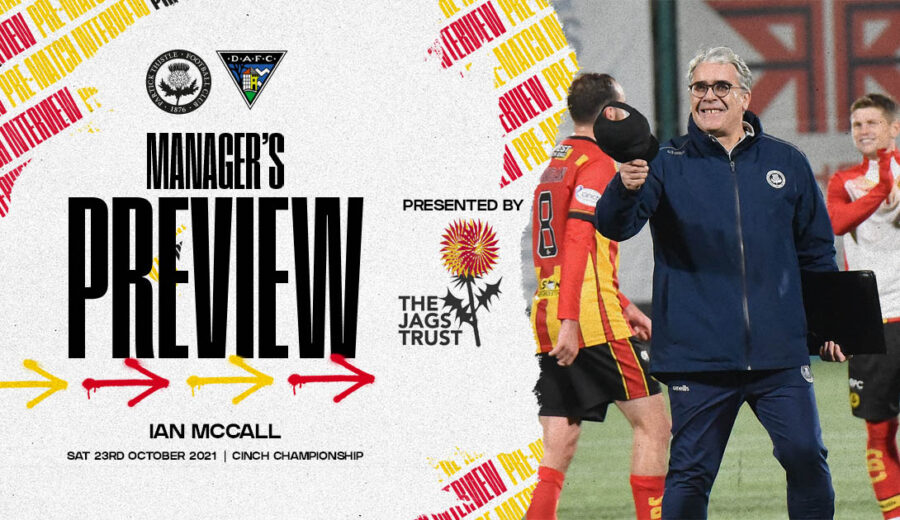 After back-to-back away games, Partick Thistle are back in Maryhill this Saturday for a very special weekend. The club is celebrating 50 years since our 1971 League Cup win when we beat Celtic 4-1 in the final with the legends who played on that historic day coming to Firhill for the festivities. The current Jags squad will be hoping to mark the occasion with a win as they take on Dunfermline Athletic in the cinch Championship, hoping to make it three league wins in a row. Thistle boss Ian McCall spoke to ptfc.co.uk ahead of the match, beginning by looking back on last week’s 6-1 win over Hamilton:

“It was a special performance. The way we attacked, particularly in the second half, was fantastic and we looked a threat just about every time we got the ball. There was a bit of extra attention on the game with it being the Friday night pick on the TV and hopefully any Thistle fans who didn’t make the trip were able to watch it because it really was a great game for us.”

McCall’s Jags are the current top scorers in the Championship with six more goals scored than the second best attacking team and the gaffer says that’s something he’s been trying to implement for a while in the squad.

“That was one of my main aims when I came back here – making the team exciting to watch. It’s something that’s taken a lot of time to build going all the way back to when we signed Zak Rudden and Brian Graham last January but I think you’re seeing the results now. We’ve got confident attacking players and it shows with 10 goals in our last two league games.”

Despite such a brilliant performance and victory against Accies last time out, McCall knows his team will have to be right at it again if they want to get another three points this week.

“Once you start training for the next week you have to forget the last game whether you’ve won or lost. Once we get to the game against Dunfermline, winning 6-1 last week won’t count for anything so you have to prepare properly for each game.

“I’ve got a feeling that Dunfermline will turn things around. They’ve got some quality players and we saw what they’re capable of when we played them in the cup, albeit our team was very different that day. You need to be focused to get results in this league and Saturday will be no different.”

With members of Thistle’s 1971 League Cup winning side in attendance for the game against the Pars, Ian is hopeful of putting on a show for those legends although he doesn’t want to put any extra pressure on his players.

“It’s a very significant weekend for the club as a whole and we’ve got events planned that the fans should enjoy. That includes Saturday’s game and it would be fantastic to put on a performance befitting of the anniversary but we’ll just take a win of any kind.

“At the end of the day, it’s just another league match for us. It’ll be great to have some true club legends in attendance but we need to make sure we approach the game itself like any other and then everything else will take care of itself.”

Exclusive video interviews with Ciaran McKenna and Thistle assistant manager Alan Archibald will be available for JagZone subscribers to watch today – log in to view.

JagZone subscribers will be able to tune in to live audio commentary for our clash with Dunfermline, starting at 2:30pm – click here to tune in.